The horticulturist and garden designer Gertrude Jekyll once said, “A garden is a grand teacher.” It’s fitting, then, that Chinese scholar’s rocks and stones should be sources of inspiration for the past thousand-odd years. Chinese scholars of antiquity were masters of painting, calligraphy, poetry, or ancient texts, and they saw stones as teachers, not only in gardens, but in interiors, where they were displayed on painting tables or writing desks. 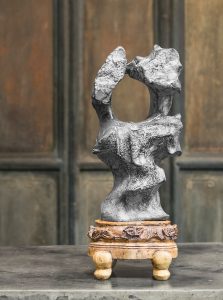 At first, scholars collected these rocks specifically for their rugged beauty. They were chosen to inspire poetry and landscape paintings, though later on they were collected simply for their natural beauty and often resided next to ink slabs, libation cups and other tools of the scholar. Beauty wasn’t exactly in the eye of the beholder, though. Thinness (shou), perforations (tou), openness (lou) and wrinkling (zhou) soon became the four aesthetic criteria upon which these pieces were judged.

The scholar’s rock might even travel with the artist for inspiration when painting mountain scenes.(An ancient version of Googling “majestic mountains.”) Sometimes referred to as “portable mountains,” these rocks were complex, wild, and rugged. Characteristic of Chinese aesthetics, the more irregular and eroded these rocks appeared to be (even if human enhancement may have, at times, played a hand), the more desirable they were. The rocks’ jagged crags, peaks and ravines embodied the transformative and awe-inspiring whims of nature, conjuring up images of remote mountain grottos, ancient sages and the monumental cliffs of the immortals.

Beyond their unique form, some rocks were also naturally adorned with patterns and veins of vibrant colors: deep greens, icy grays, and desert reds. Stones like the peony and chrysanthemum revealed incredible bursts of white which resembled flowers (hence the name). Many rocks were named after the creatures and habitats they mimicked. And all were a little bit special in their own way.

Sometimes, Googling “portable mountains” just doesn’t cut it. Sometimes, beauty really is something you have to hold. 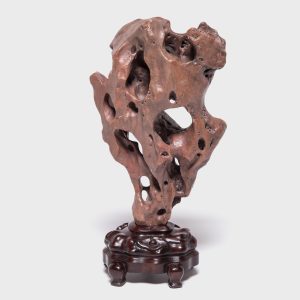 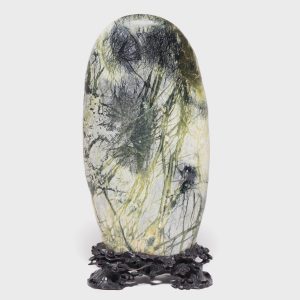 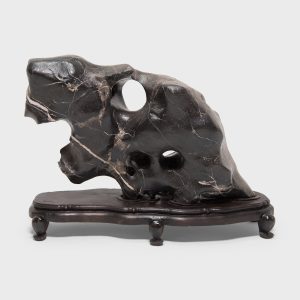