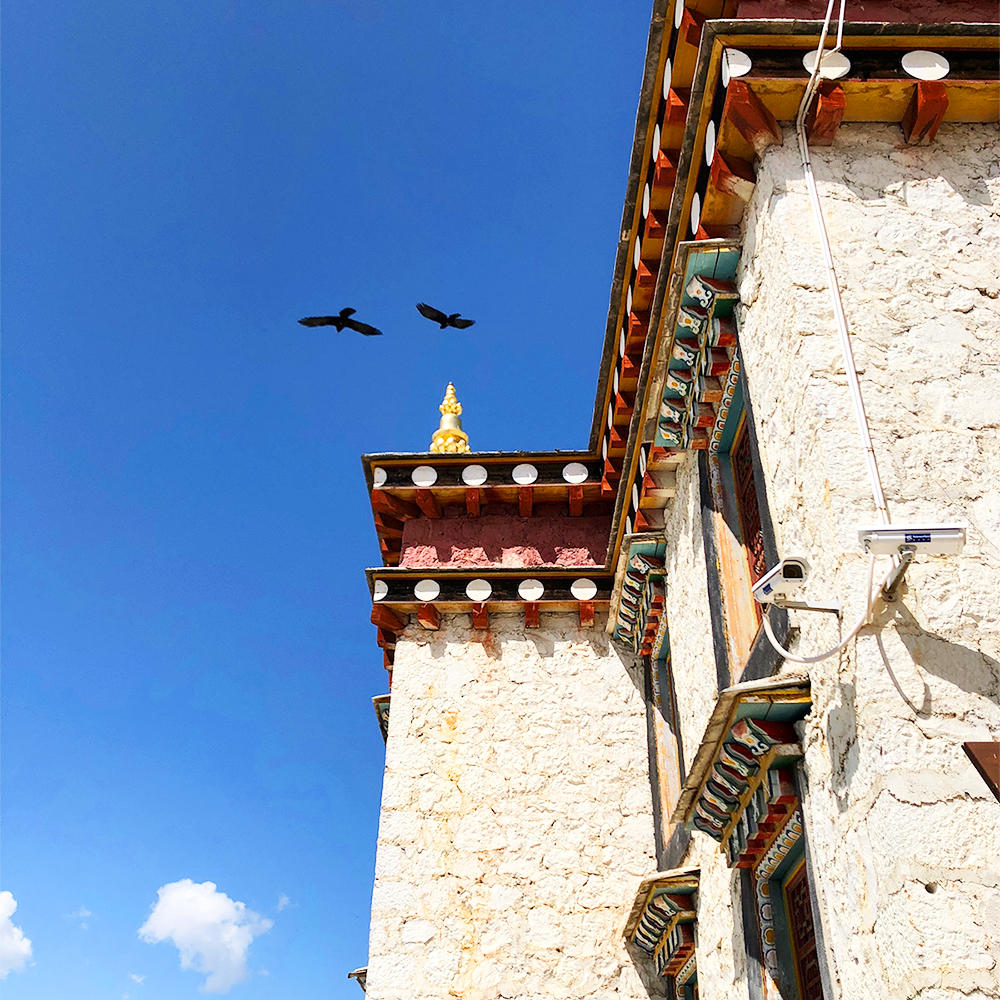 Earlier this year, PAGODA RED founder, Betsy Nathan took her teenage son, Levi, on a solo trip to Yunnan Province, China. The pair hiked a portion of the Tea Horse Trail—the southern equivalent of the historic Silk Road trading route. As the name suggests, the Tea Horse, which first emerged during the Tang Dynasty, was used to ferry tea from Southern China up to Tibet. There, it was traded for Tibetan horses and salt. Historically, the trip was a dangerous and lengthy undertaking—groups of 200 horsemen made the trek, which could take up to 6 months, and required keeping an eye out for tea thieves along the way. 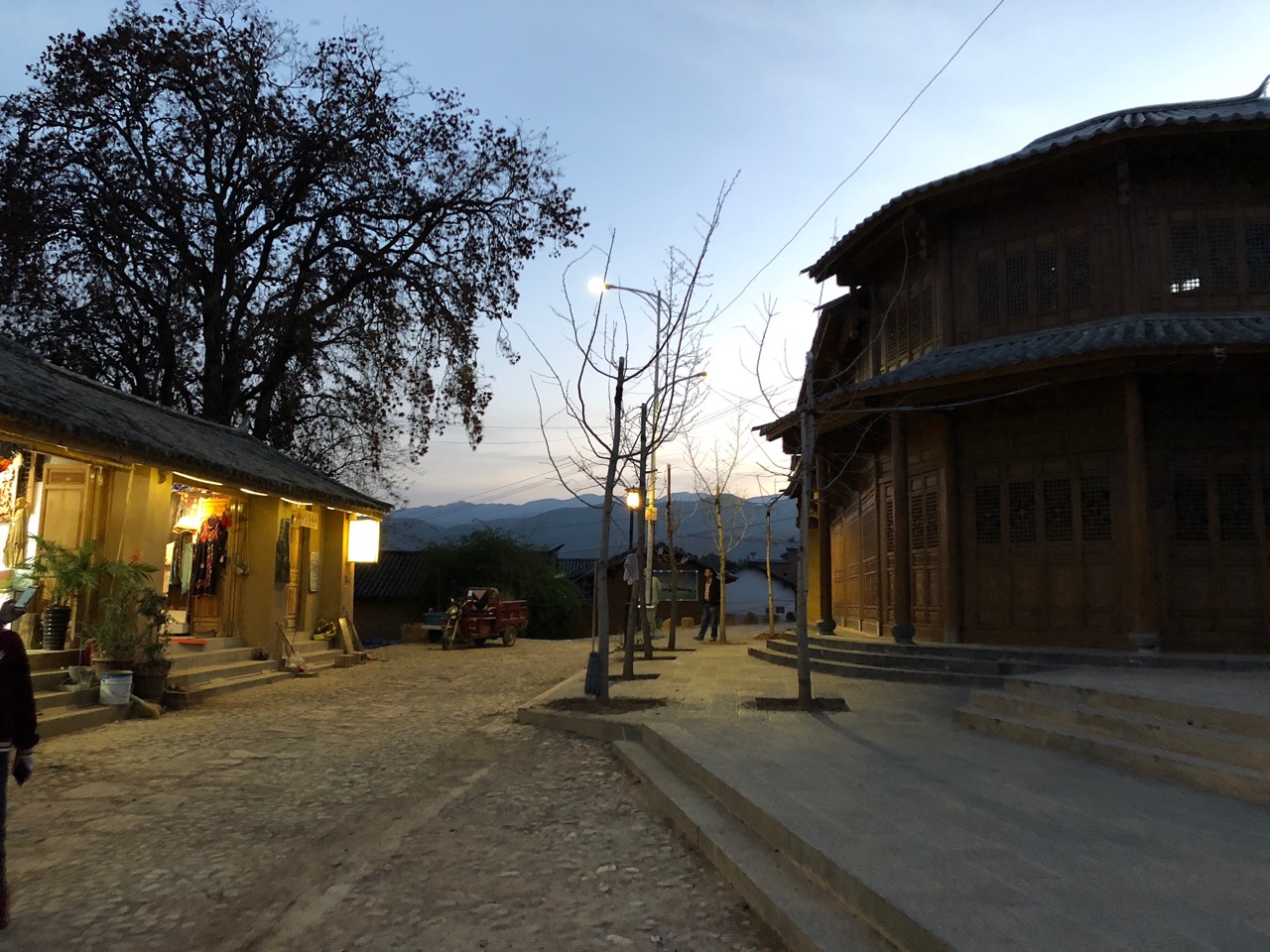 The town of Shaxi. Photo by Betsy Nathan.

Pu’er (or Pu Erh) tea leaves, known for their medicinal qualities, were grown and harvested by the Bai people—master cultivators of the notoriously sensitive Pu’er tree. Meanwhile, the Naxi people were the traders who made the physical journey, acting as a go-between, connecting the non-Buddhist Bai people with the Tibetan Buddhists to the north. Led by a Naxi guide whose grandfather had been a famous horseman, Betsy and Levi began their journey in the small town of Shaxi, pictured above. 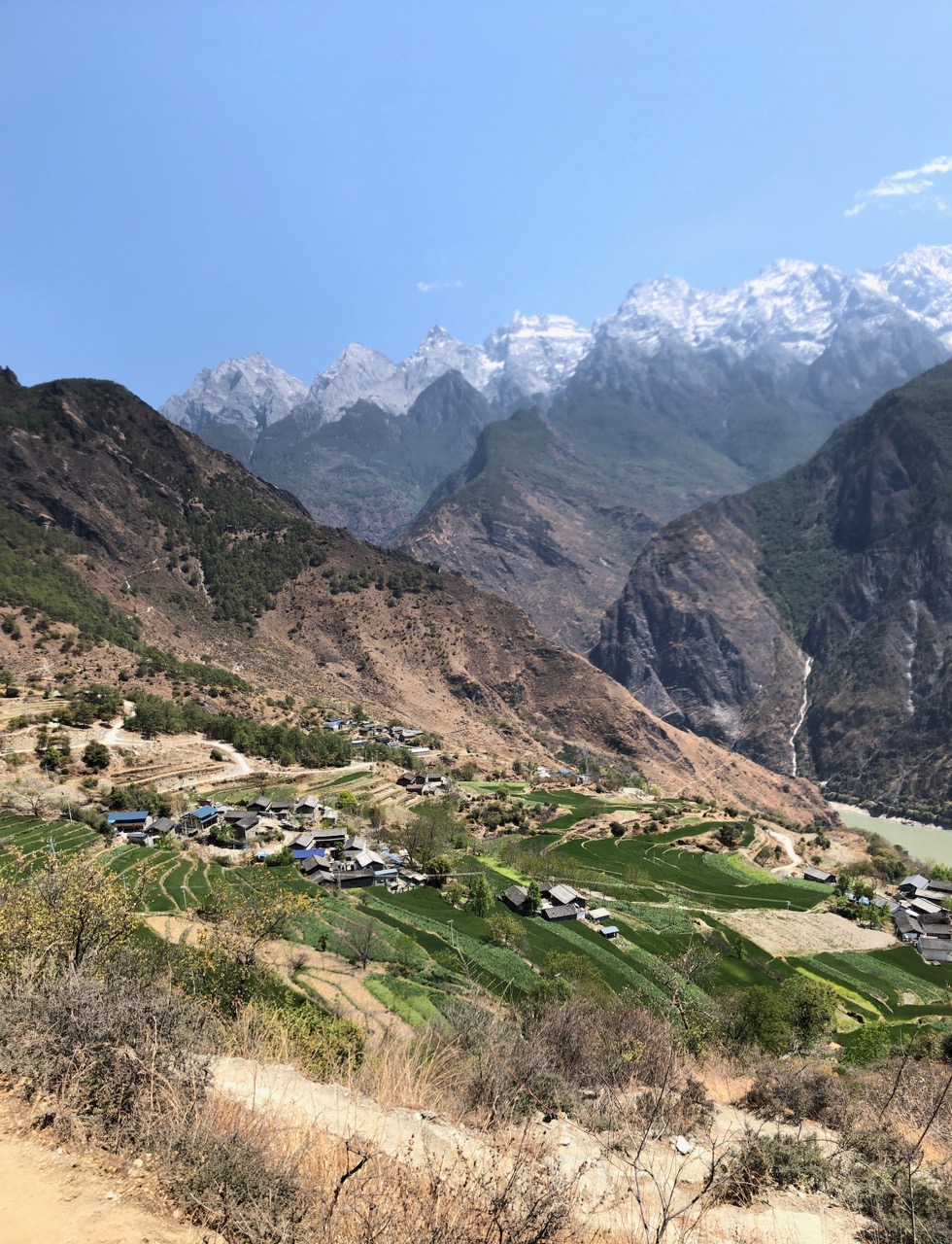 Looking towards the mountains. Photo by Betsy Nathan.

Shaxi remains a place of deep historical significance as an ancient trading post. “It was the last town where horsemen stocked up on provisions before heading to Tibet,” explains Betsy. “Now it’s become a center for young Chinese artists and creatives, who are looking to live a different lifestyle, outside of today’s transactional China—people looking for spiritual inspiration. It’s a small, remote town that you navigate on foot. It offers an opportunity to live an extremely different life than you would in a large Chinese city.” Geographically, Shaxi is situated in the lowlands or foothills of the Himalayas. The BBC calls it “one of the most intact and beautiful sites along the Tea Horse Road.” 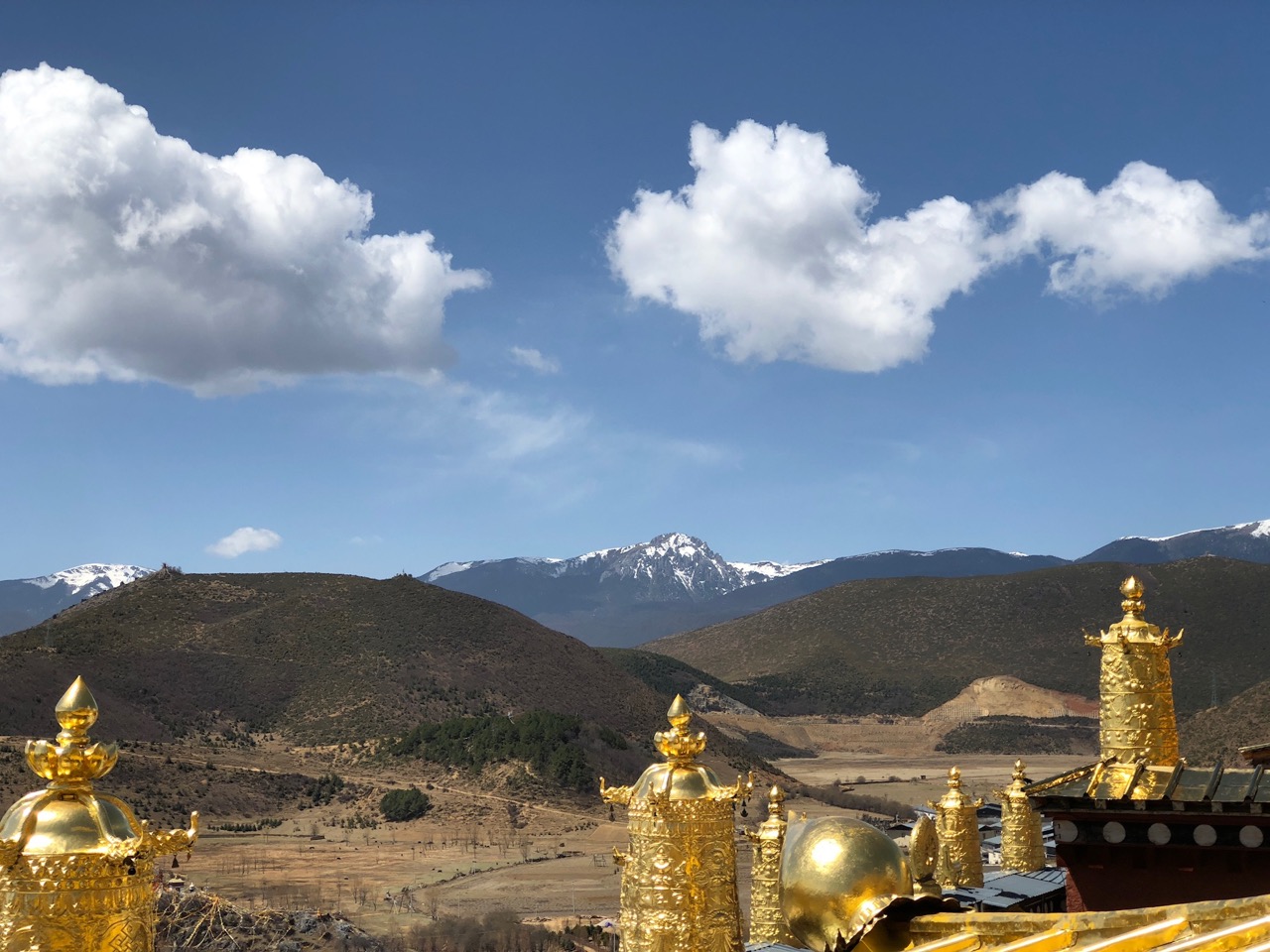 A view from Shangri-La. Photo by Betsy Nathan.

After the hike, Betsy and Levi visited Zhongdian (or Gyeltang in Tibetan), which is known now as Shangri-La. The name was officially changed to “Shangri-La” in 2001 as part of a country-wide contest. Taken from the 1933 James Hilton novel Lost Horizon, the re-name was part of a government effort to promote Chinese tourism. Now a major attraction, the city straddles two distinctly different cultural atmospheres. 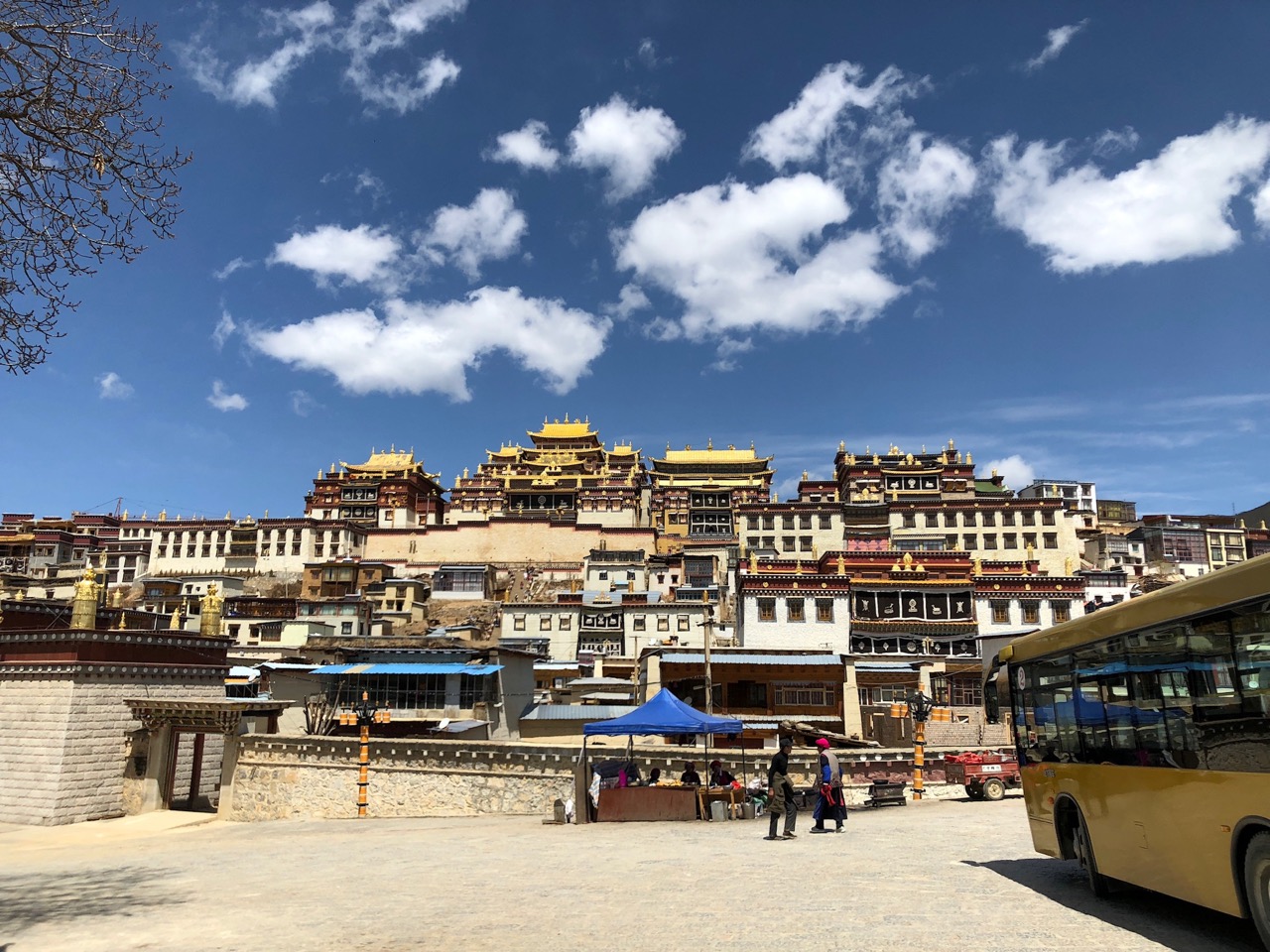 The Ganden Sumtseling Monastery of “Shangri-La.” Photo by Betsy Nathan.

“It becomes this complicated and strange experience,” explains Betsy. “It is a heavily marketed place, one that has been transformed into something similar to a Tibetan Disney. The Ganden Sumtseling Monastery [the golden temple-complex pictured above] is thousands of years old and an important religious place for Buddhists, with many practicing monks inside.” 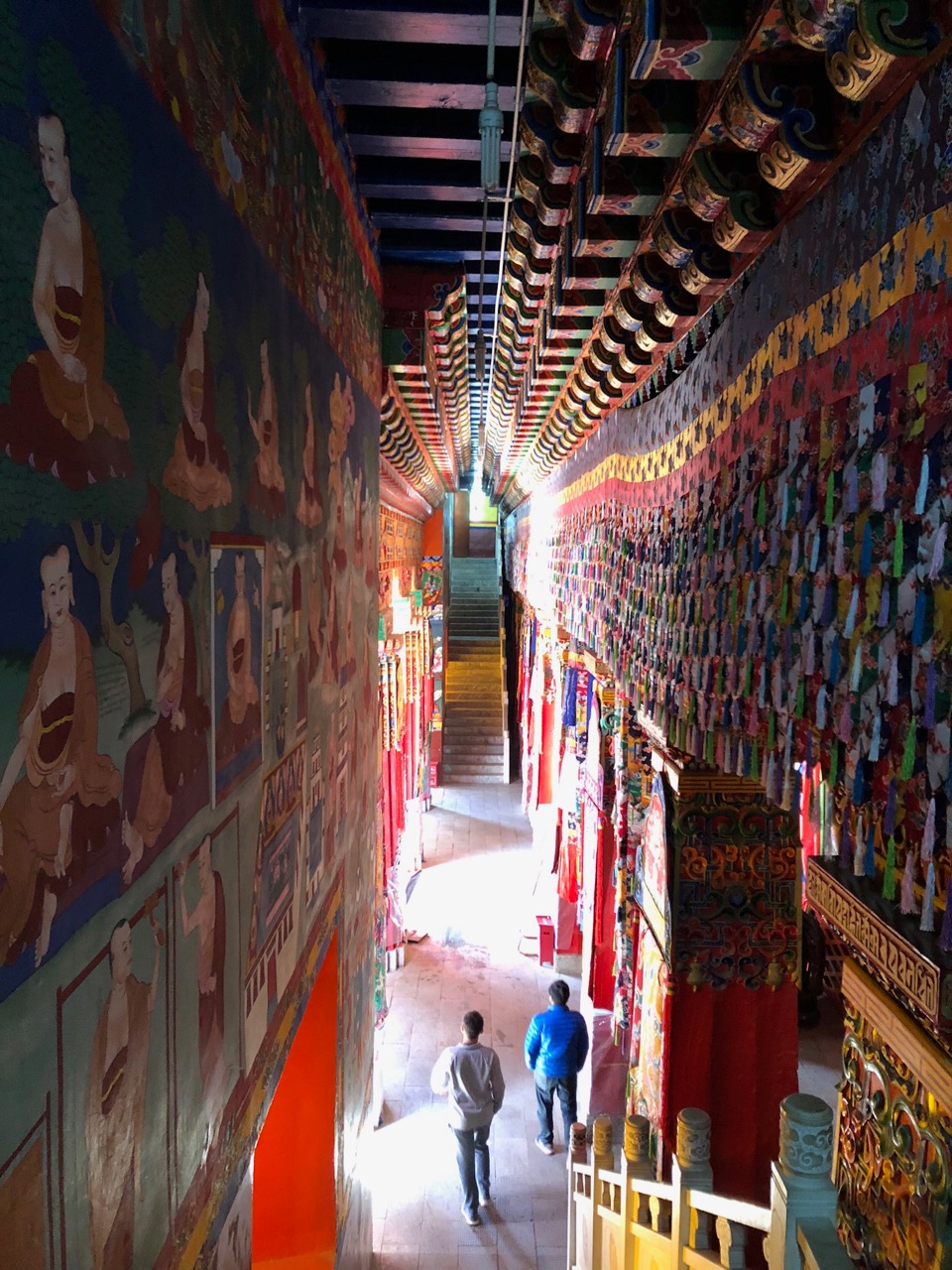 An interior of The Ganden Sumtseling Monastery. Photo by Betsy Nathan.

The monastery was constructed in 1679 and remains the largest Tibetan Buddhist monastery outside of Lhasa, the spiritual capital of Tibet. It is well-cared for both inside and out, thanks to its prominence as an important Chinese tourist destination. Countless religious treasures are housed within, including the extraordinarily vibrant traditional paintings adorning the halls. 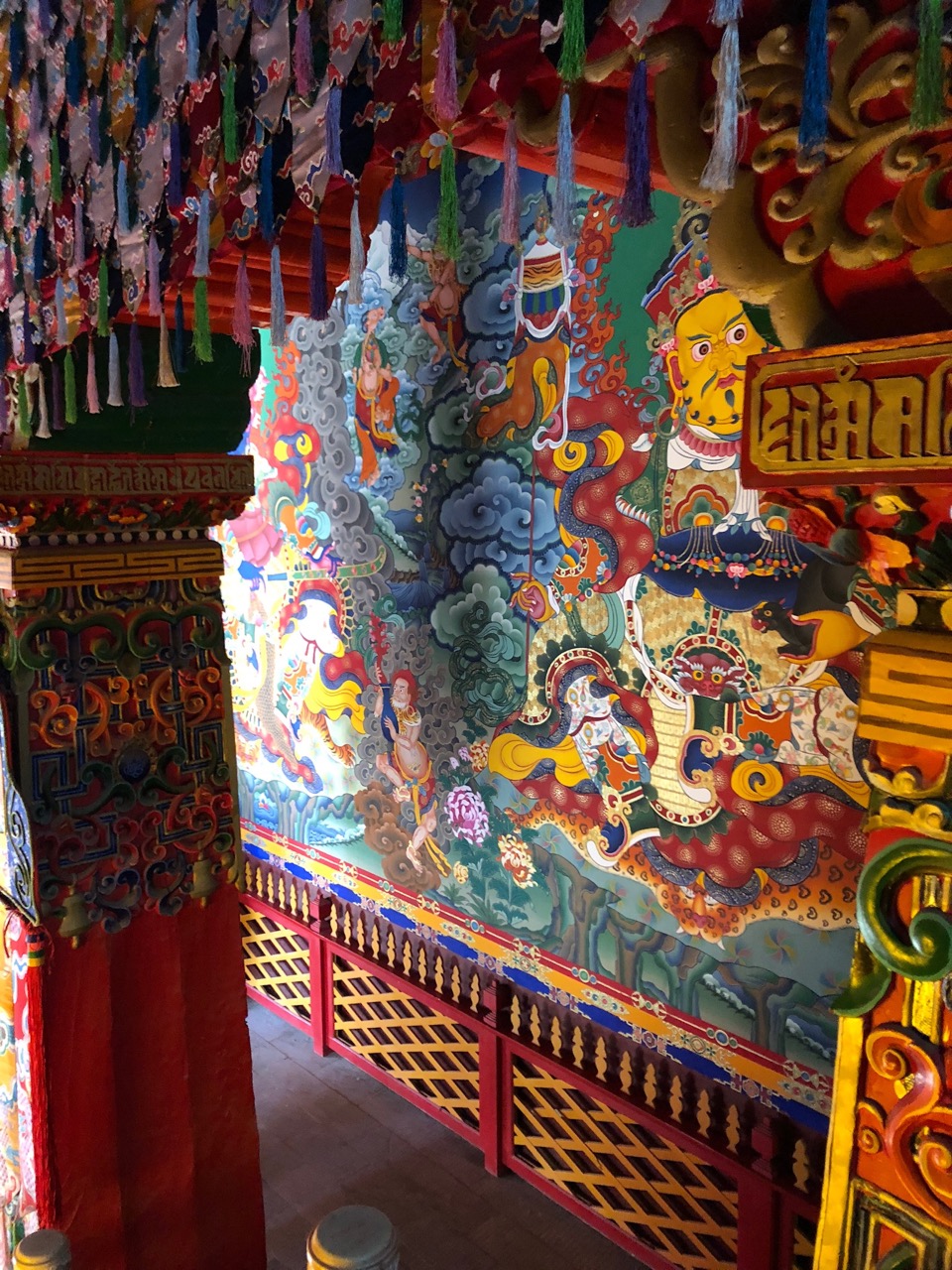 “The face of each thangka is traditionally created with a fine cover secured at it’s top as protection,” says Betsy. “Everything in the painting has spiritual significance and meaning.” For example, the blue clouds in the painting above represent the heavens. The head and hands near the center depict Zeeba, an important protector, are a warning against greed. 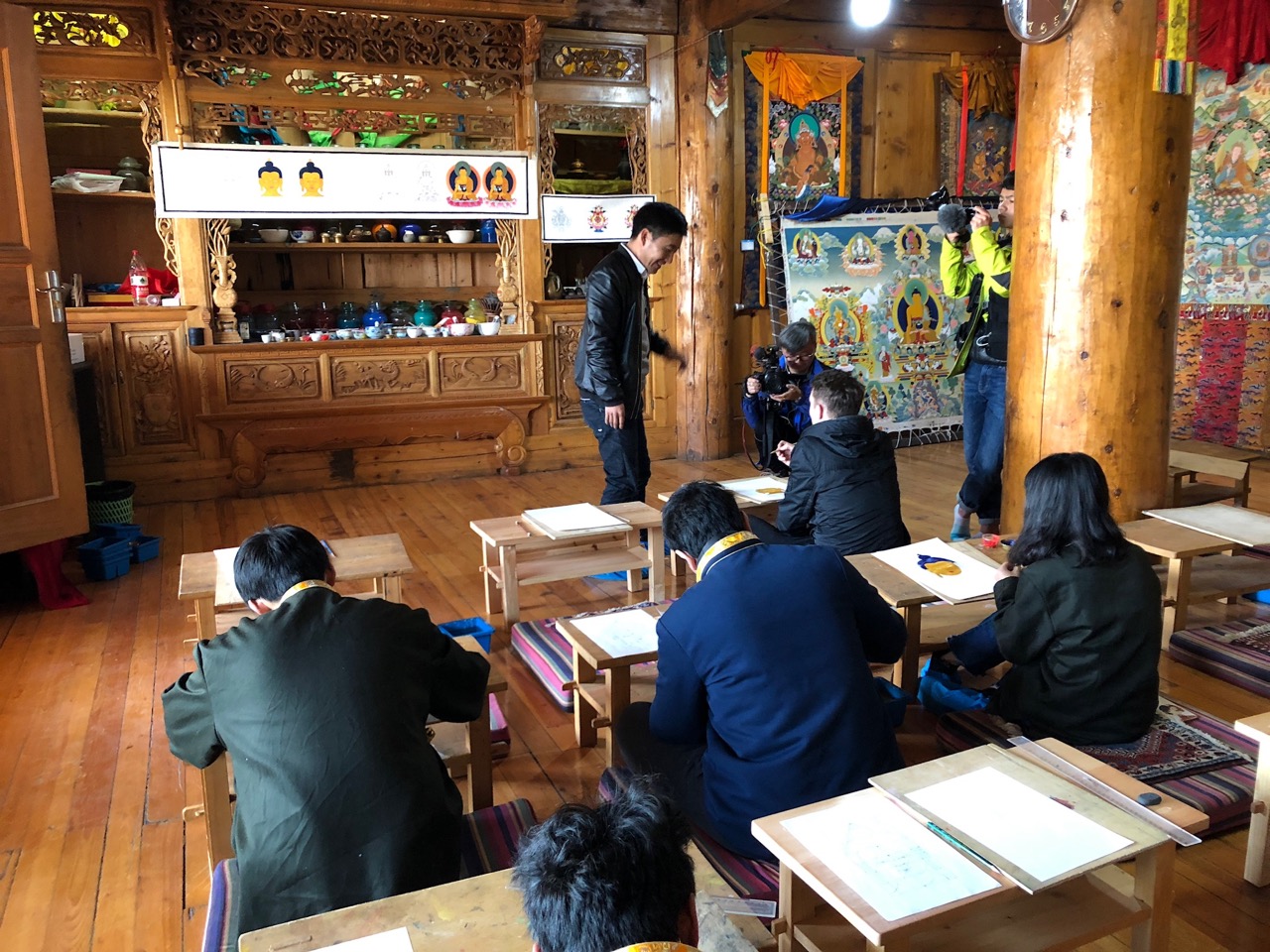 The Shangri-la Thangka Institute is not far from the monastery and hidden in a cobblestoned alley of the town. “Whether you’re Tibetan, Chinese or a westerner you can take a class. You’ll learn the ancient methods, the meaning behind the art, and how the craft evolved and developed. Each thangka is a spiritual map, guiding towards enlightenment,” explains Betsy. “Traditionally, this was an art form that was kept within families, passed from father to son. The tradition is waning with modernization, so it is wonderful that there is a school to keep this beautiful part of Tibetan culture alive,” she says. 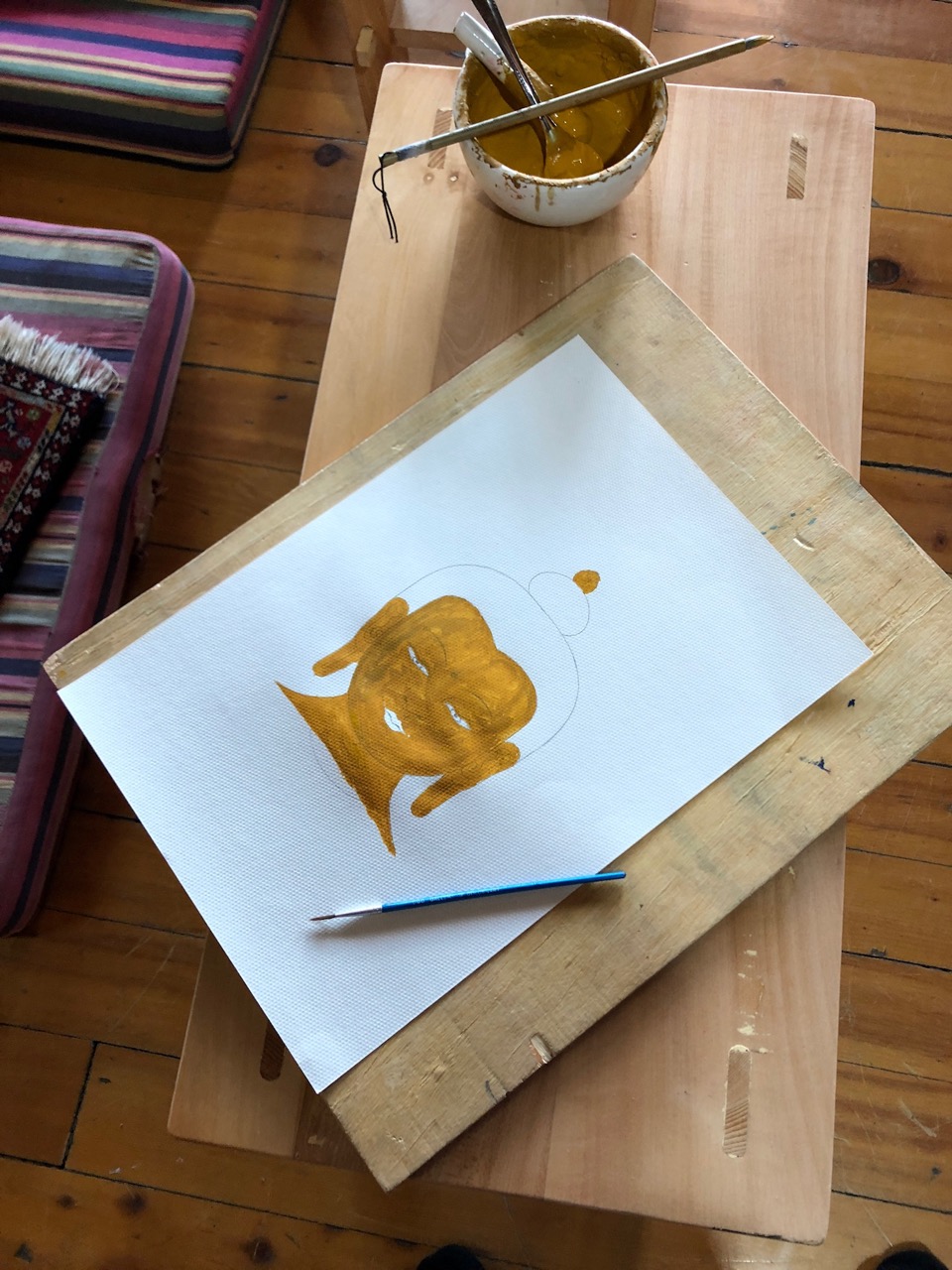 A student’s work in progress. Photo by Betsy Nathan.

“In the PAGODA RED gallery, we have a contemporary painter named Liu Yi, who grew up not far from here,” says Betsy. “He considers each of his works to be a meditation.” His painting titled “Akshobhyavajra” took many months to create and features the central figure of Akshobhyavajra, a Tibetan Buddha. With meticulous detail, Lui’s work renders traditional Tibetan thangka icons using modern color and technique. 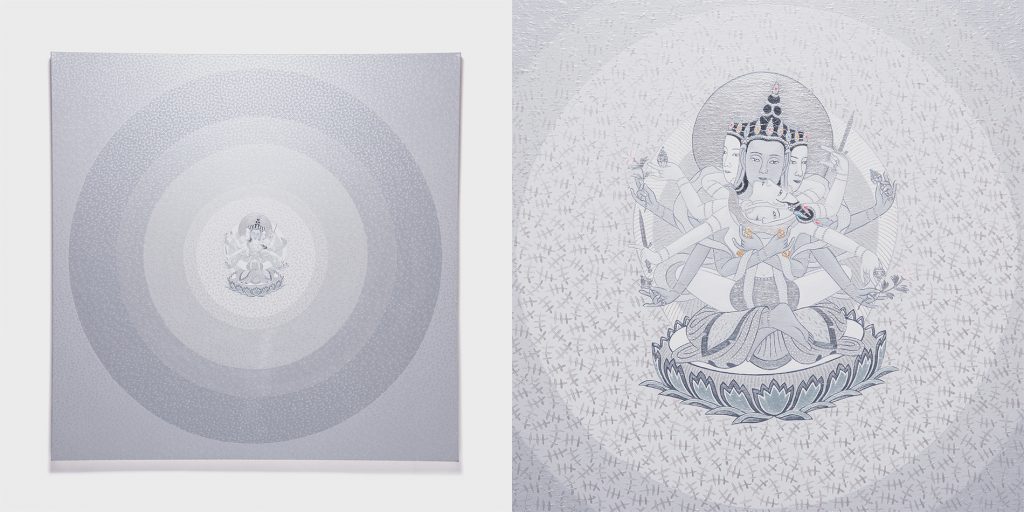 In a more traditional Tibetan Thangka below, the central deity stands on two human figures. The central figure is atop a lotus. Lotus flowers, known to grow from the mud, represent the goal of spiritual purity. Near the top of the painting, sits a Buddha and a bodhisattva figure ascending a spiritual, celestial path. 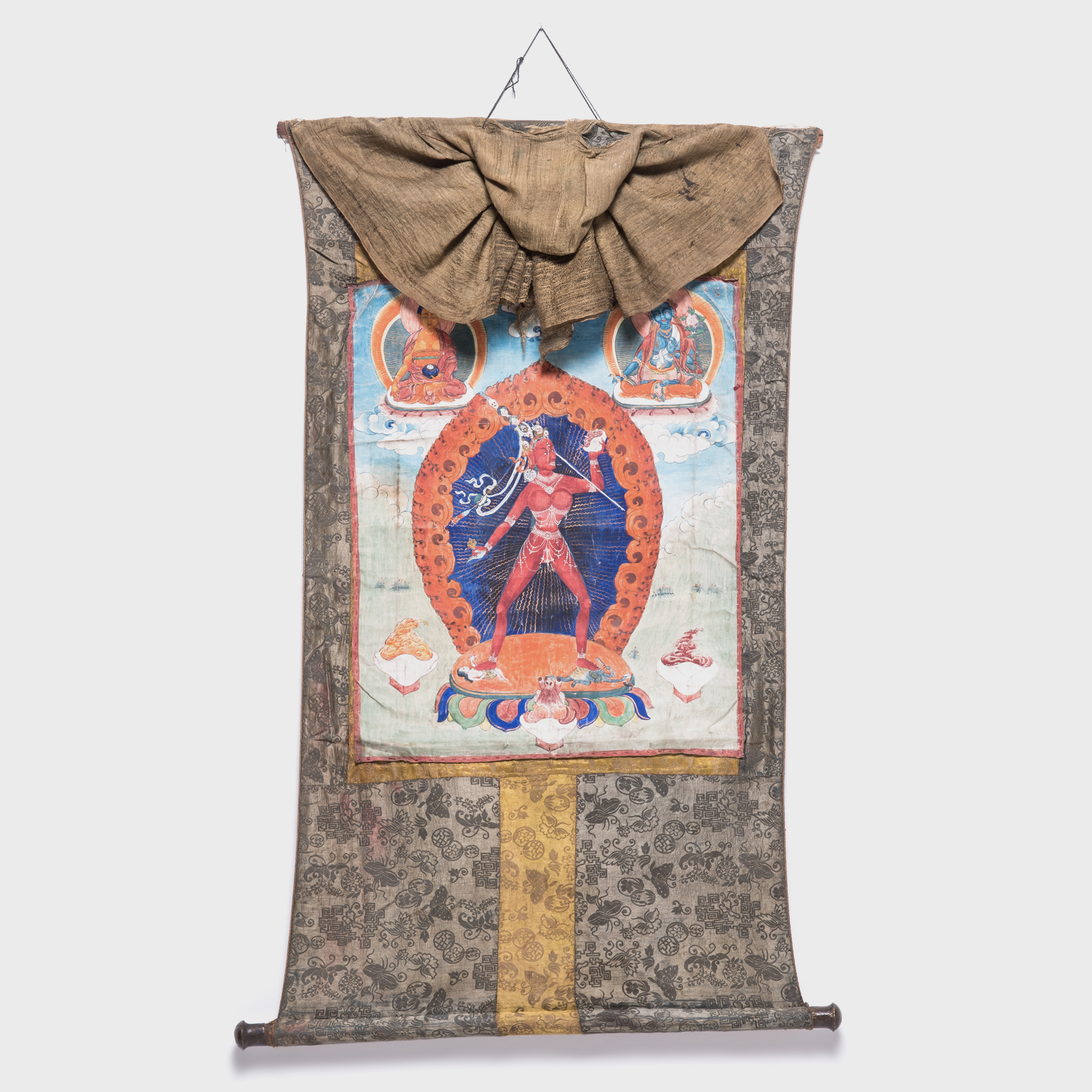 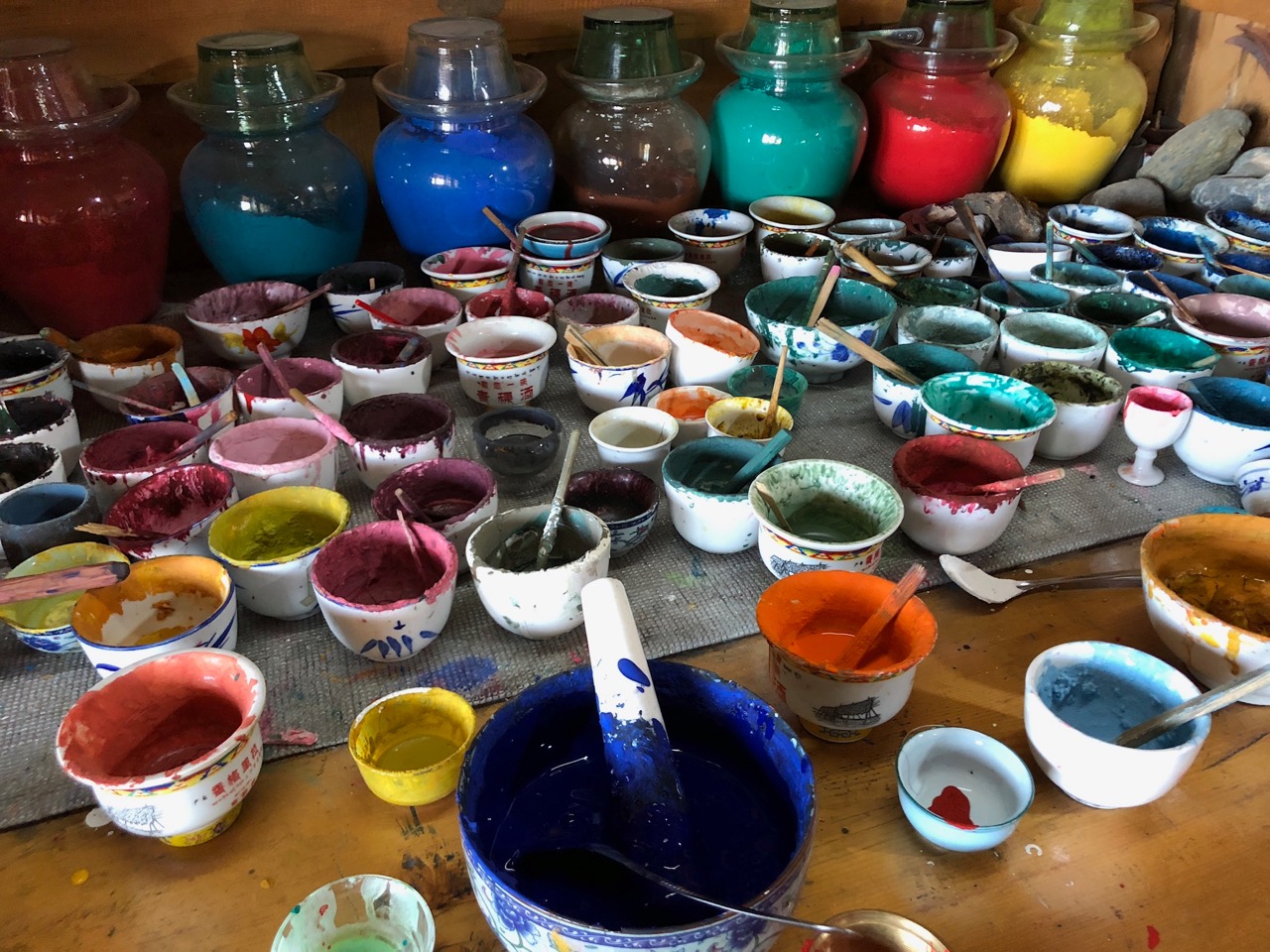 Back at the Shangri-la Thangka Institute, Betsy and Levi got an up-close look at the traditional handmade pigments which are still used to make thangka paintings. Similarly, the practice of stretching hand-made paper shown below, is centuries old. 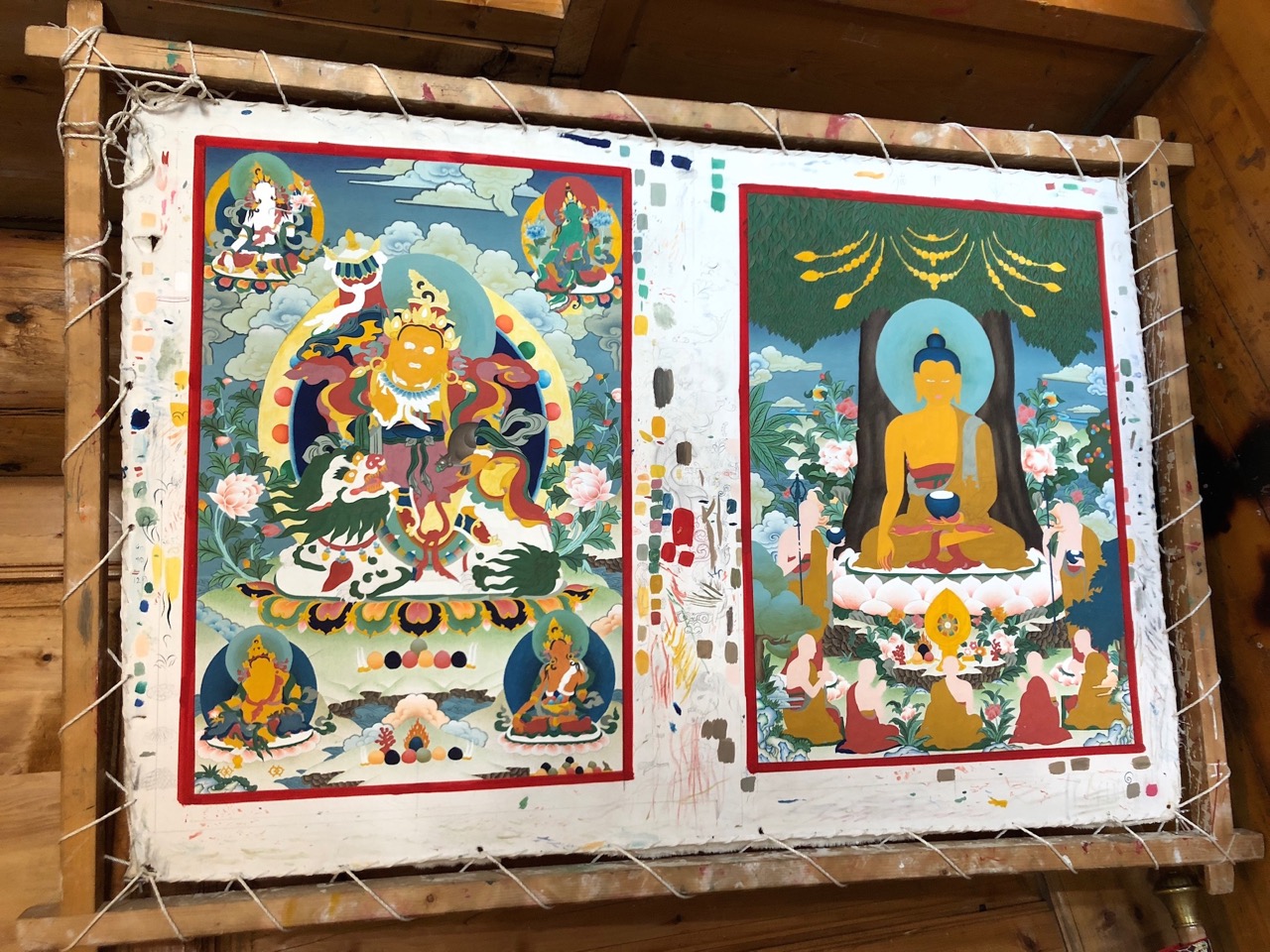 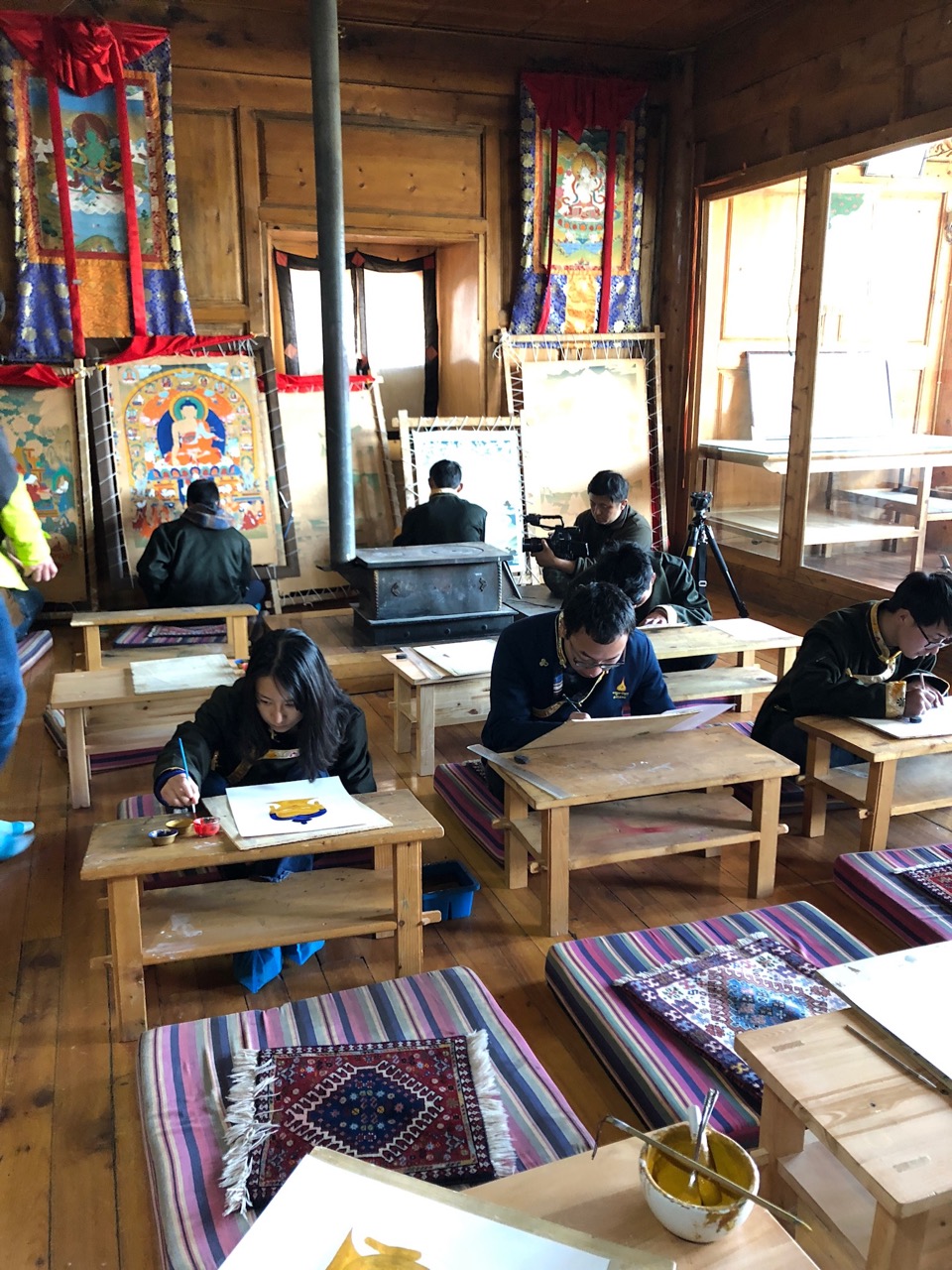 Students at work in the Shangri-la Thangka Institute. Photo by Betsy Nathan. 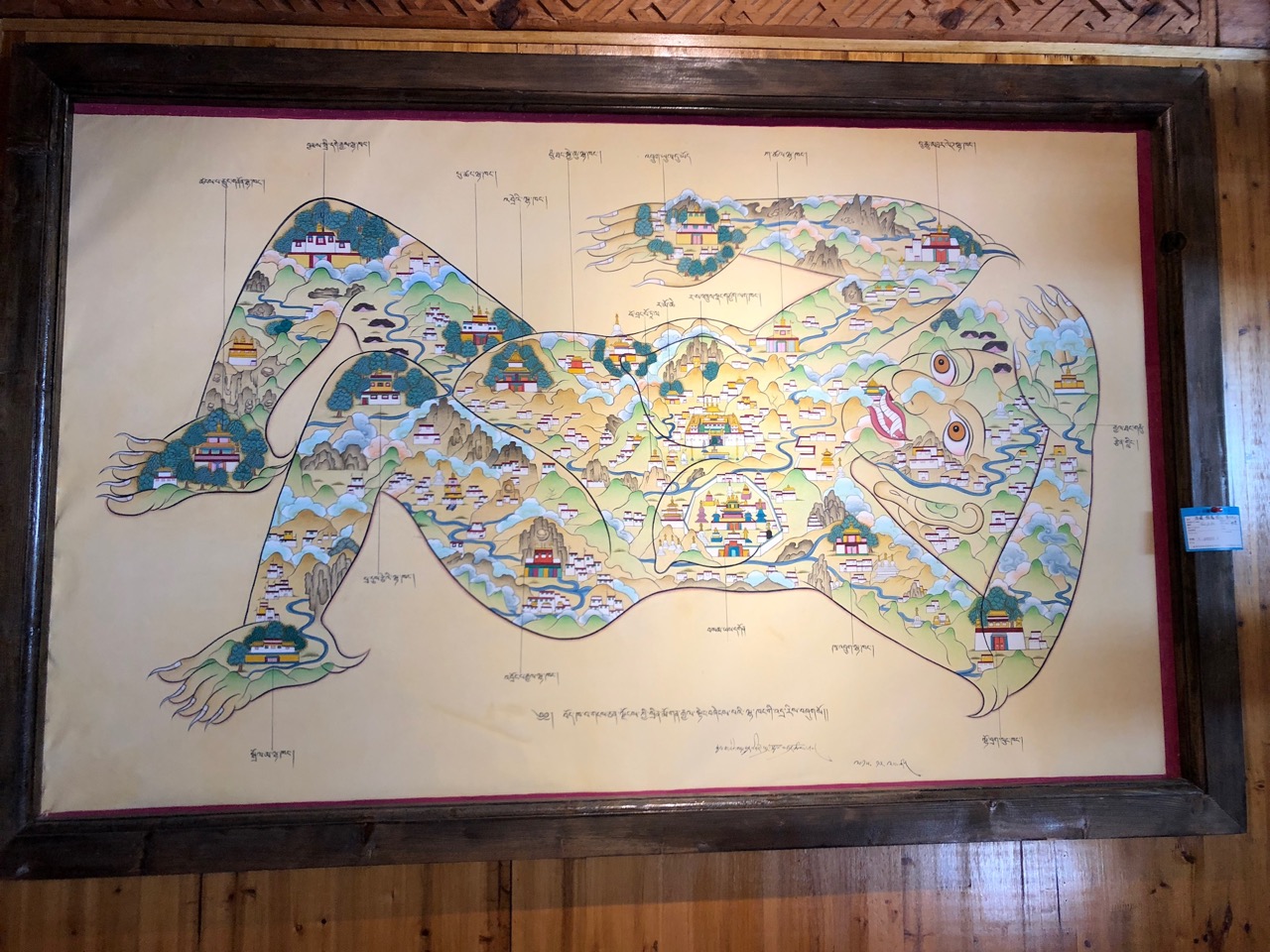 An artful map of Tibet within the Shangri-la Thangka Institute. Photo by Betsy Nathan.

The artwork above is a map, depicting Tibet as a thriving being. “You can see all of the different monasteries across Tibet, as part of the body,” says Betsy. “This is a map of Tibet as a living spirit.” 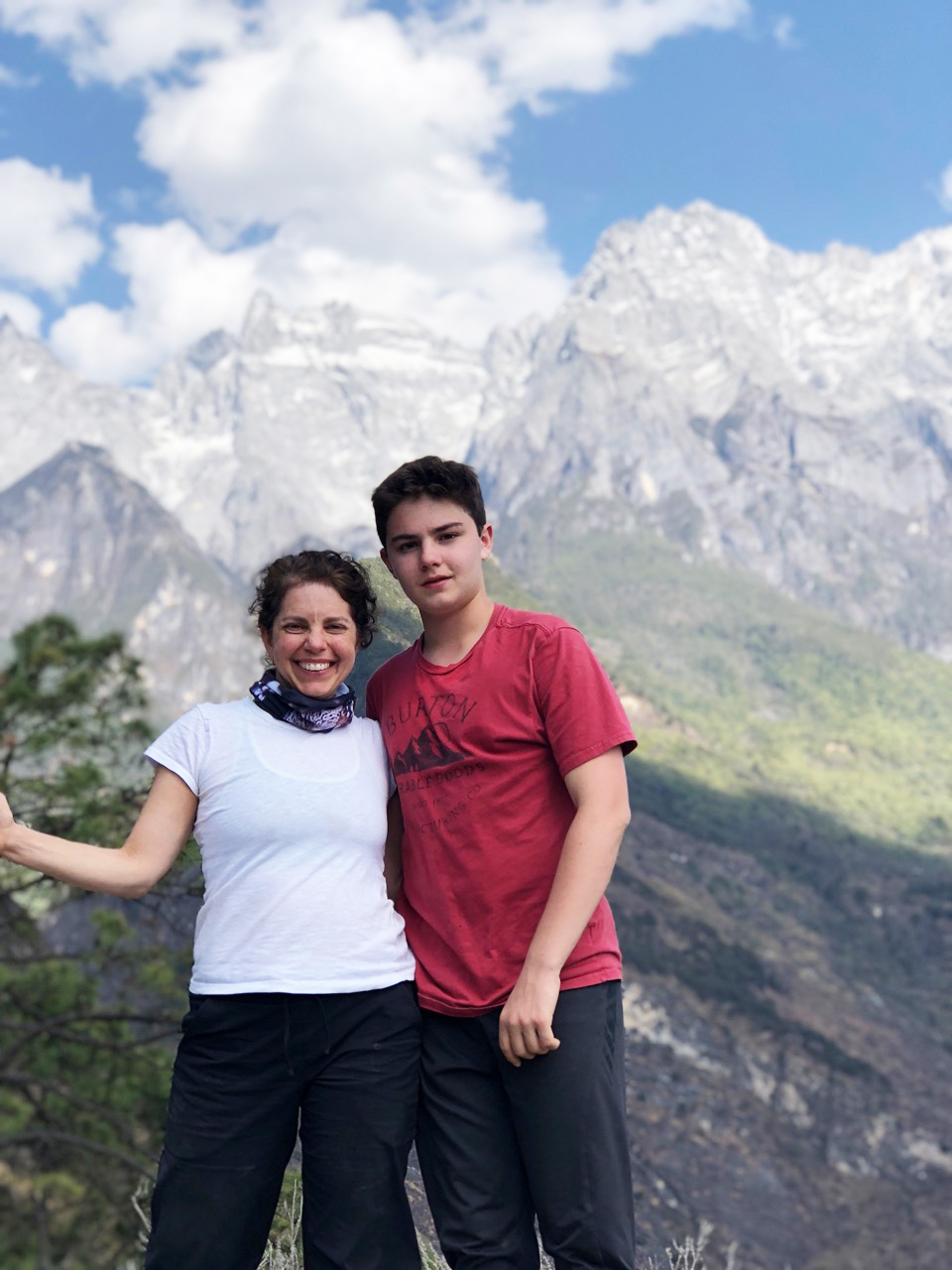 Betsy Nathan and her son Levi.

Located in the Bucktown neighborhood of Chicago, our dynamic 15,000 square-foot gallery is always changing. Storied furniture, fine art and extraordinary objects from around the world are waiting to be discovered. We invite you to experience the spirit of PAGODA RED online or in our gallery.