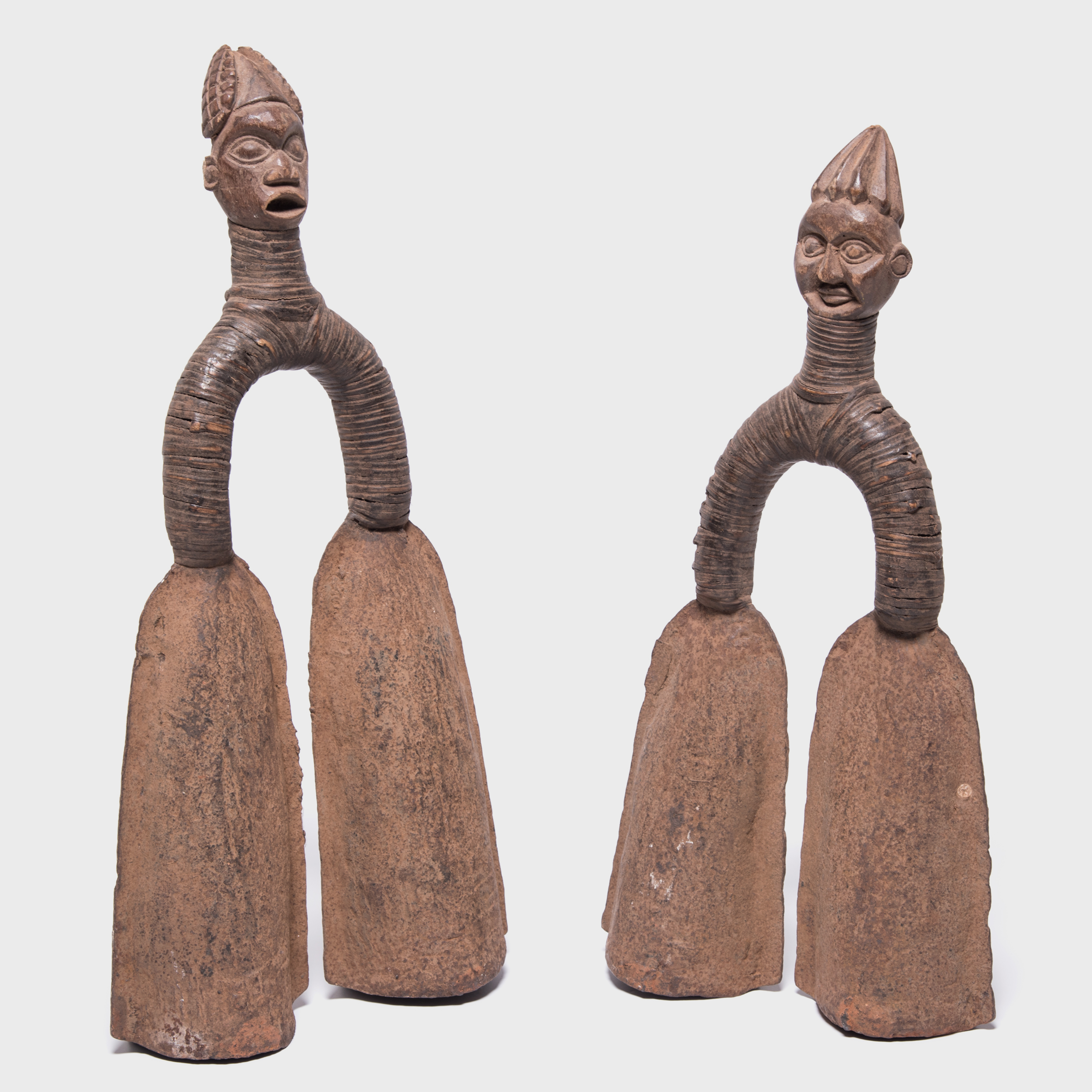 Inspired by Striking Iron: The Art Of African Blacksmiths, an exciting new exhibition from The Fowler Museum at UCLA, we’re delving into the stories behind a few favorite works of African metal, from our own collection.

The Fowler is part of UCLA’s School of the Arts and Architecture, and is renowned for its in-depth exploration of global arts and culture. The show runs through December 30th, 2018 and includes a rich online component—replete with informative videos—for those who’d like to glimpse the show from afar. 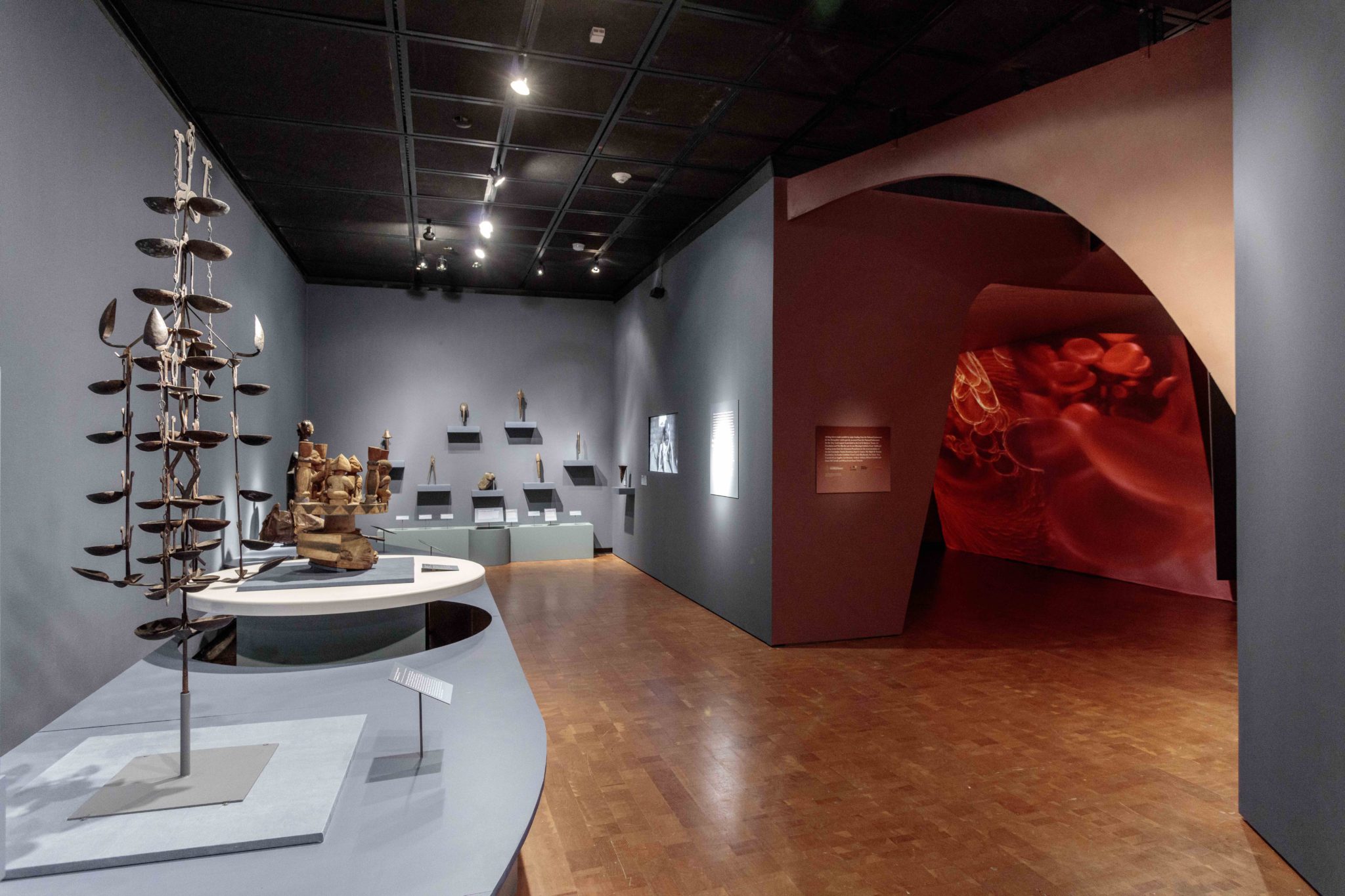 From the Fowler: “The Iron Age revolutionized Africa and forever altered human civilization practically and symbolically.” The collection of 225 utilitarian and spiritual objects celebrates the imagination and sophistication of 19th and 20th century African blacksmiths. According to the Fowler, these revolutionary craftsmen made “objects of life-changing utility, empowerment, prestige, artistry and spiritual potency.” 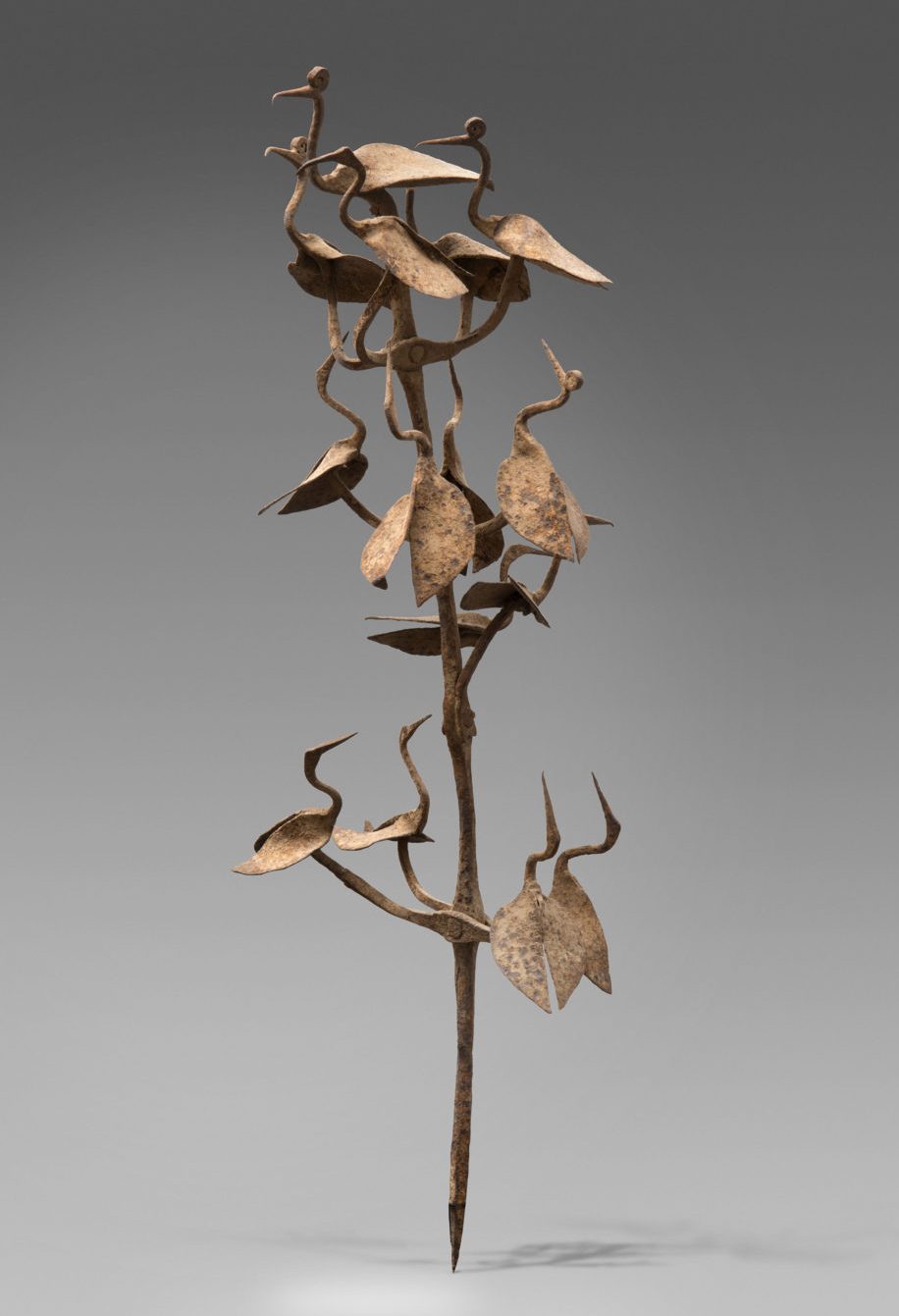 An Herbalist’s Staff from the exhibition | Yaruba | Collection of Mina and Samir Borro.

In the incredibly detailed piece above, regal birds appear to alight on a series of branch-like perches. Yoruba priests and diviners would often invoke the aid of Osanyin, the god of herbal medicines, in an effort to cure mental and physical ailments. These ceremonial staffs are typically composed of a large bird elevated above a group of smaller birds. The birds often total 16 in all—a number considered to be deeply sacred.

In the example below, a hand-forged staff from our collection is crowned by a large bird with wings poised as if preparing to take flight. Underneath, smaller birds radiate outward, symbolizing Osanyin’s vast healing powers. 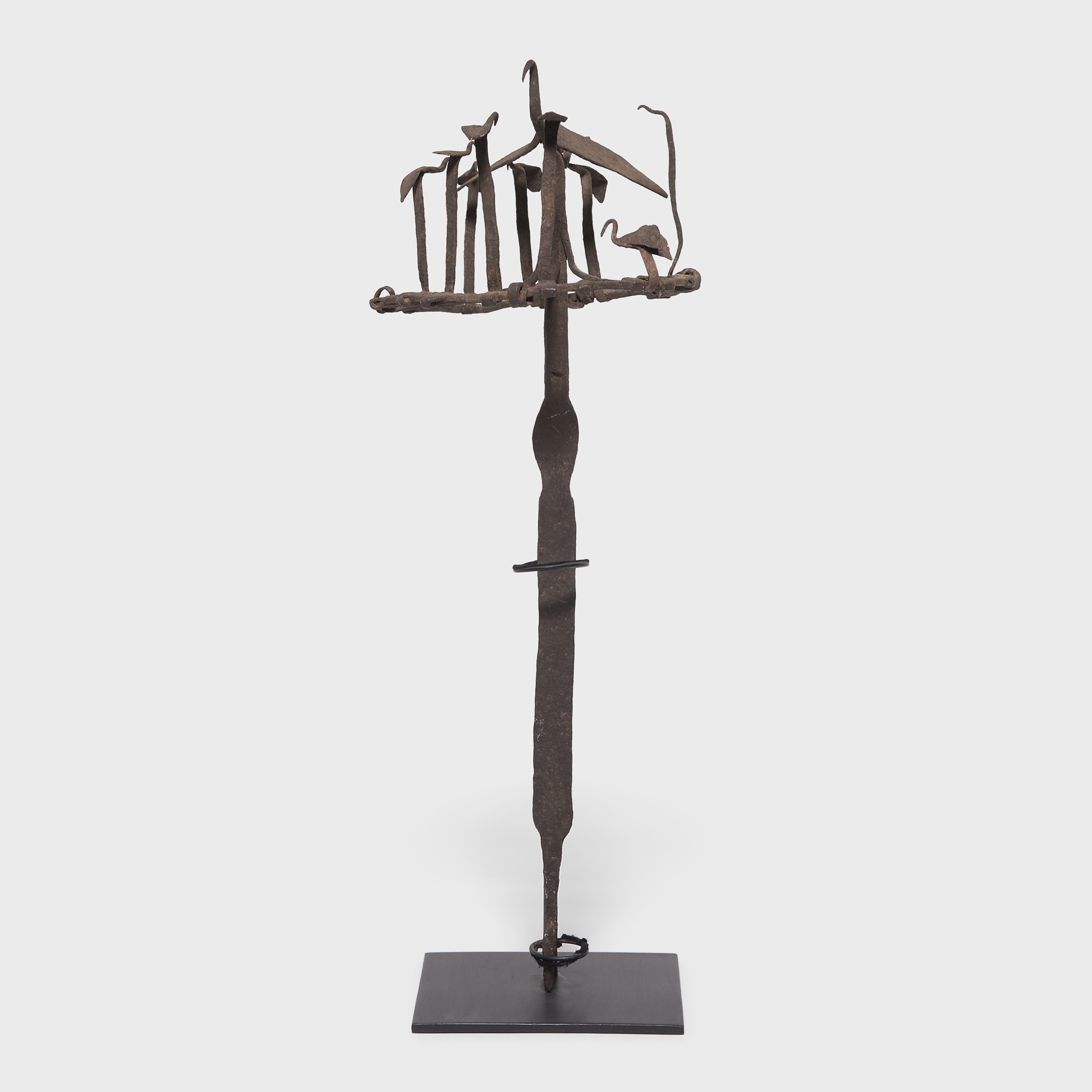 The intricately embellished scepter below, is part of a group within the exhibition, titled “Blades of Power and Prestige.” According to the Fowler, this selection “explores the continent’s most elaborately forged blades, axes, spears, and staffs. Intended to communicate ideas about prosperity, prestige, and authority, these objects exemplify the links between virtuosity, beauty, and efficacy.” 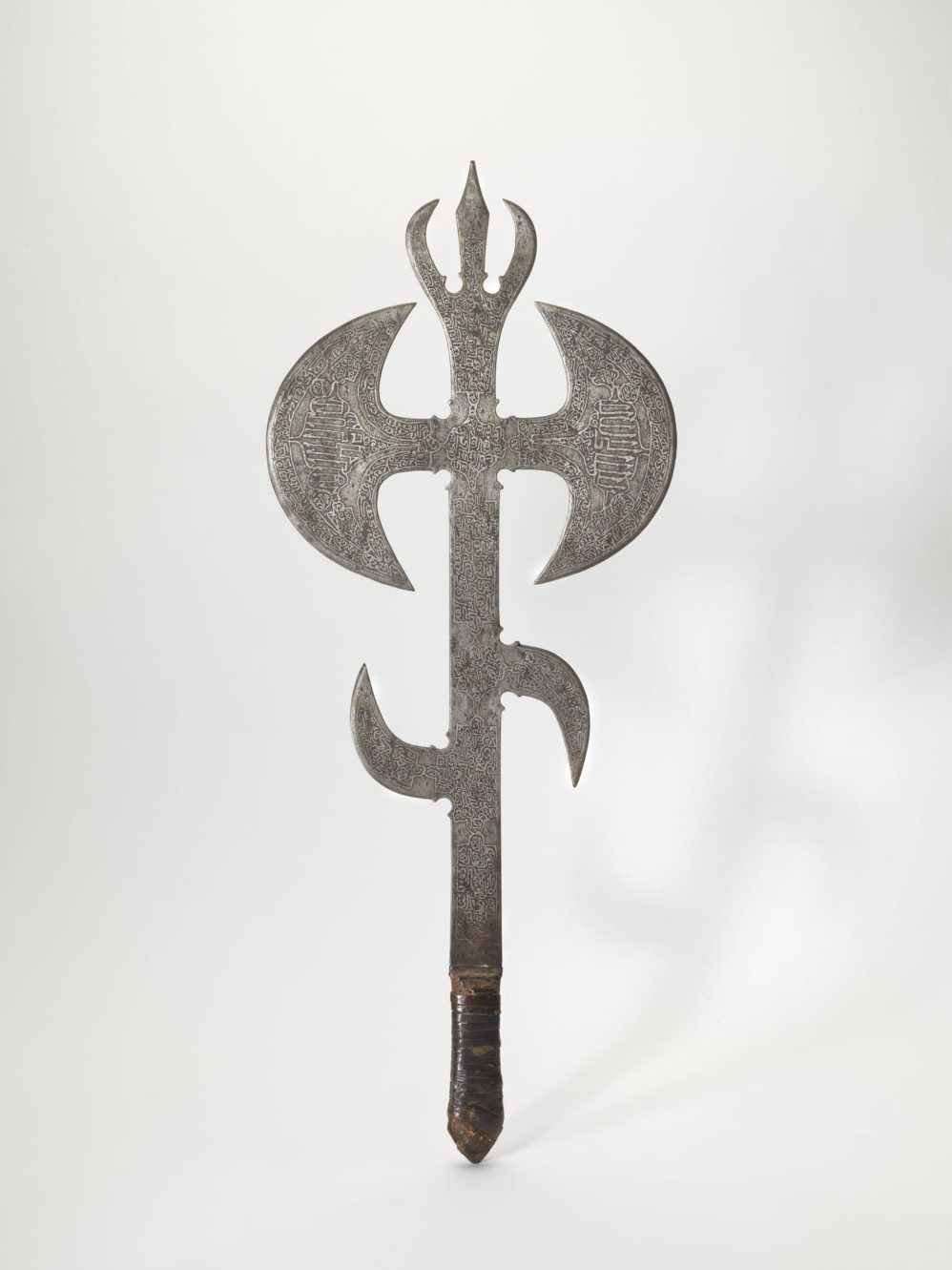 While the metal shield below hails from 1850s Nigeria, and is decorated in a more primitive fashion, it is no less ornate. The shield’s subtle textures are invisible from a distance, with the complexity of the pattern becoming evident as one draws near. The Mofu tribe were famed for their metal shields. Expertly crafted, they were also highly functional, providing a far superior defense to the wood and reed versions carried by other tribes. 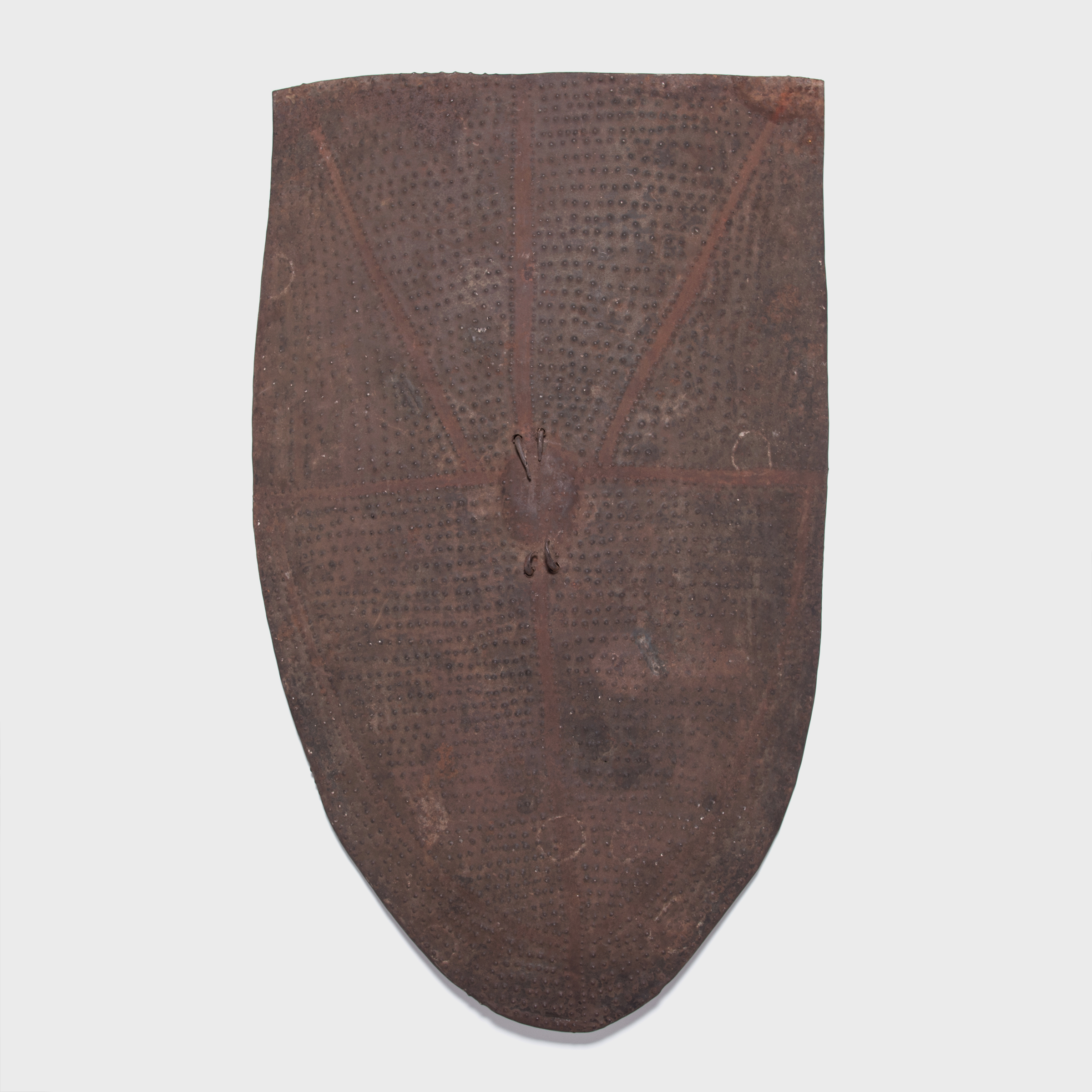 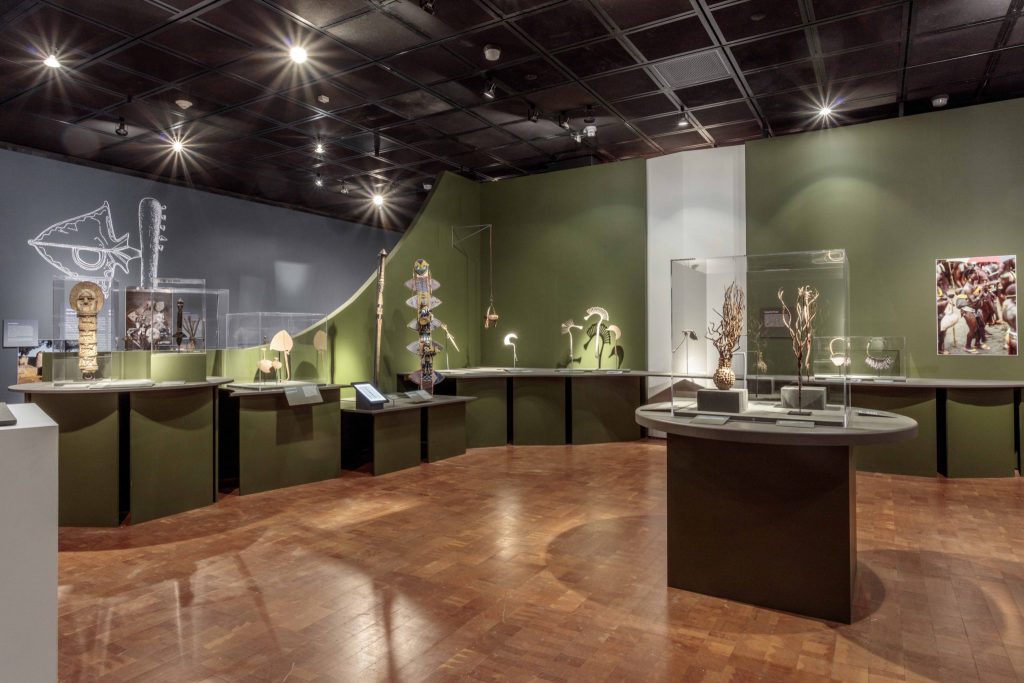 According to the Fowler, hoes, sickles and axes—tools that enabled Africans to survive and thrive—inspired a range of ritual and ceremonial objects, like the decorative sickle below. “Dance wands and staffs carried in ceremonies to mark social passages show the brilliant originality of individual smiths.” Such artfully forged objects became valuable status symbols, in pre-colonial Africa and were traded as currency. 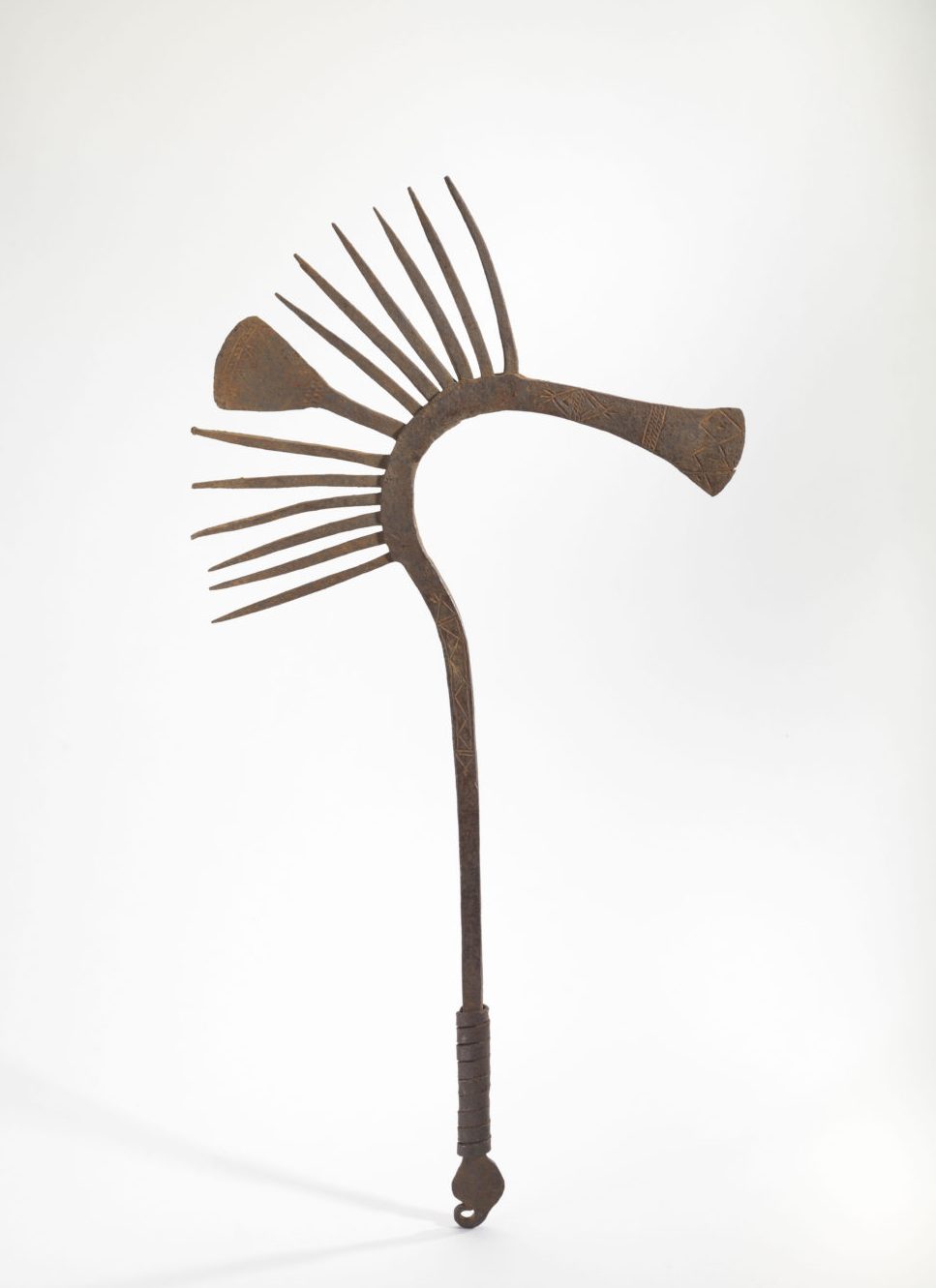 The plumed bird’s head decorating the regal staff below, calls to mind flocks of exotic birds common to northwestern Cameroon. Valued for both its artistry and material, the work lives on as an arresting rough-hewn sculptural object. Beautiful on its face, its rich and storied history makes it even more remarkable. 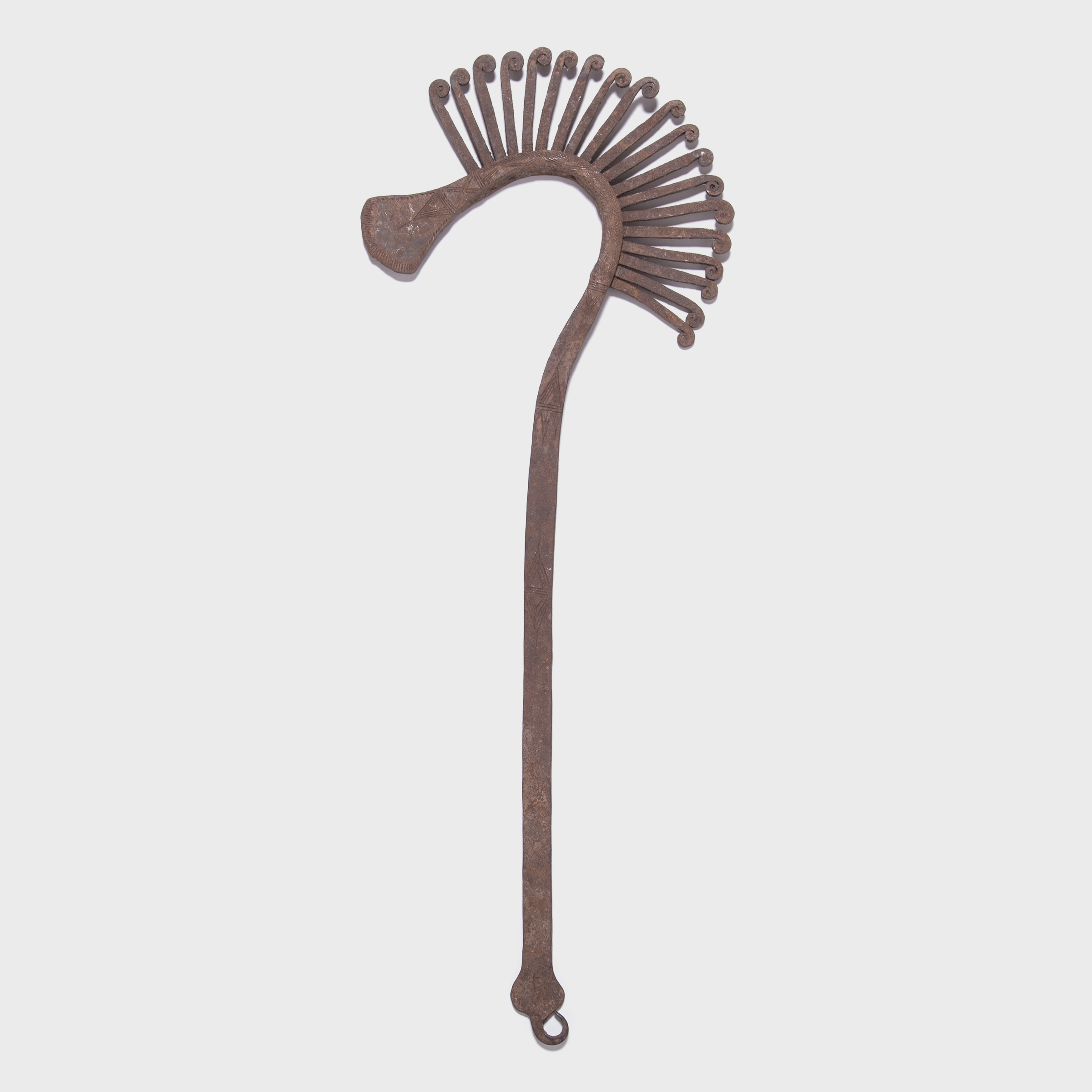 According to the Fowler, the exhibition takes the viewer from the micro to the macro, beginning with reminders of iron’s critical role in the universe, moving through archaeological evidence of ironwork on the African continent, and touching on the ways in which histories are passed down as cosmologies or fables. “Communities use stories to reveal and explain the brilliant inventions and innovations of blacksmiths, who release iron from rock to transform it into life‐changing objects,” says the Fowler. 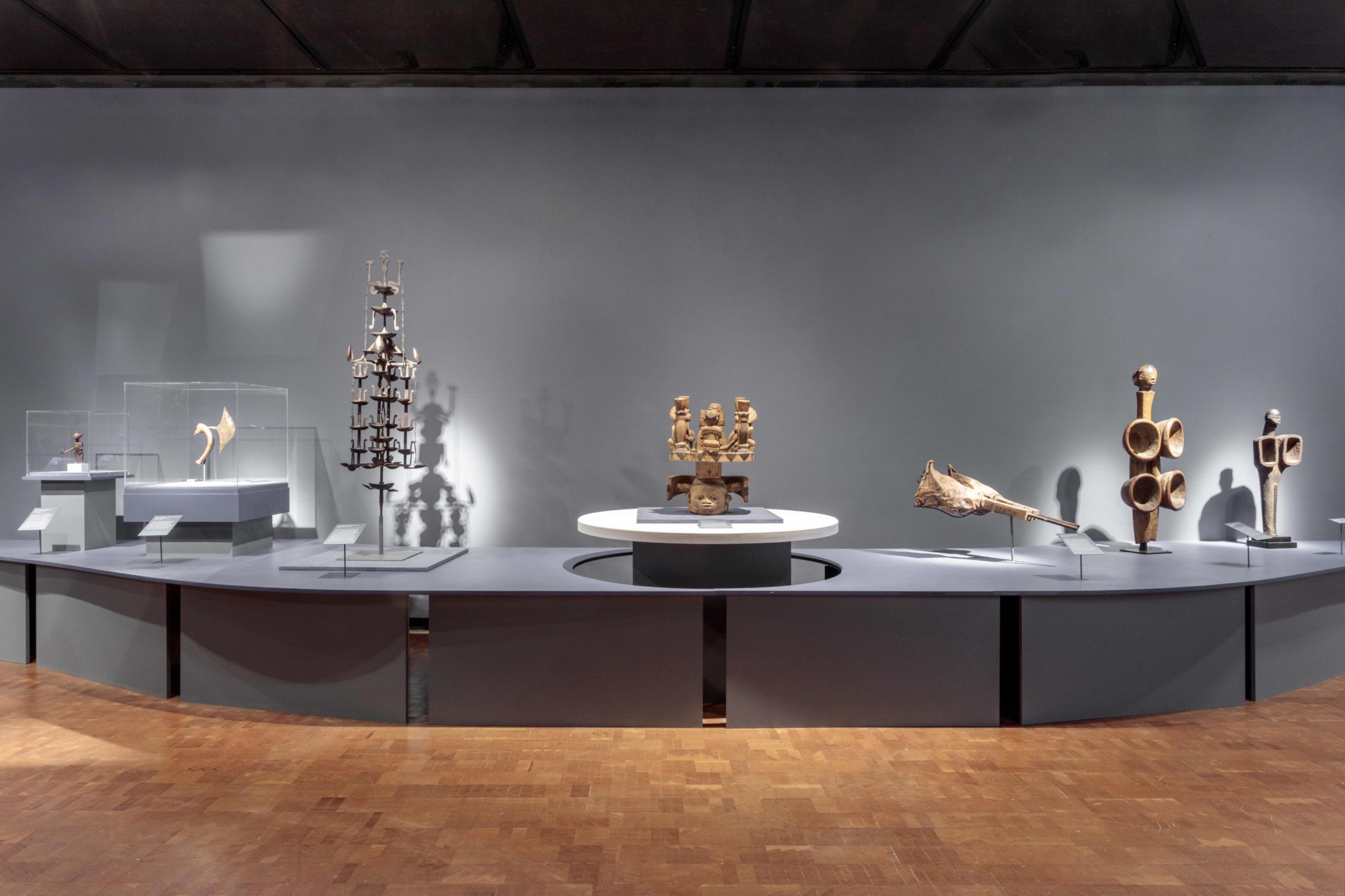 Like many pieces of traditional African metalwork, the pair of sculptural double bells below, served numerous purposes. The hand-carved artifacts were at once sacred ceremonial instruments, status symbols, and tradable currency.

Striking Iron: The Art Of African Blacksmiths winds down by shining a spotlight on works of iron which incorporate musicality. From the Fowler: “Such iron instruments often call forth ancestors and other spirits. Visitors exit the exhibition to the rhythms and resonances of iron’s sonorous orchestrations.” 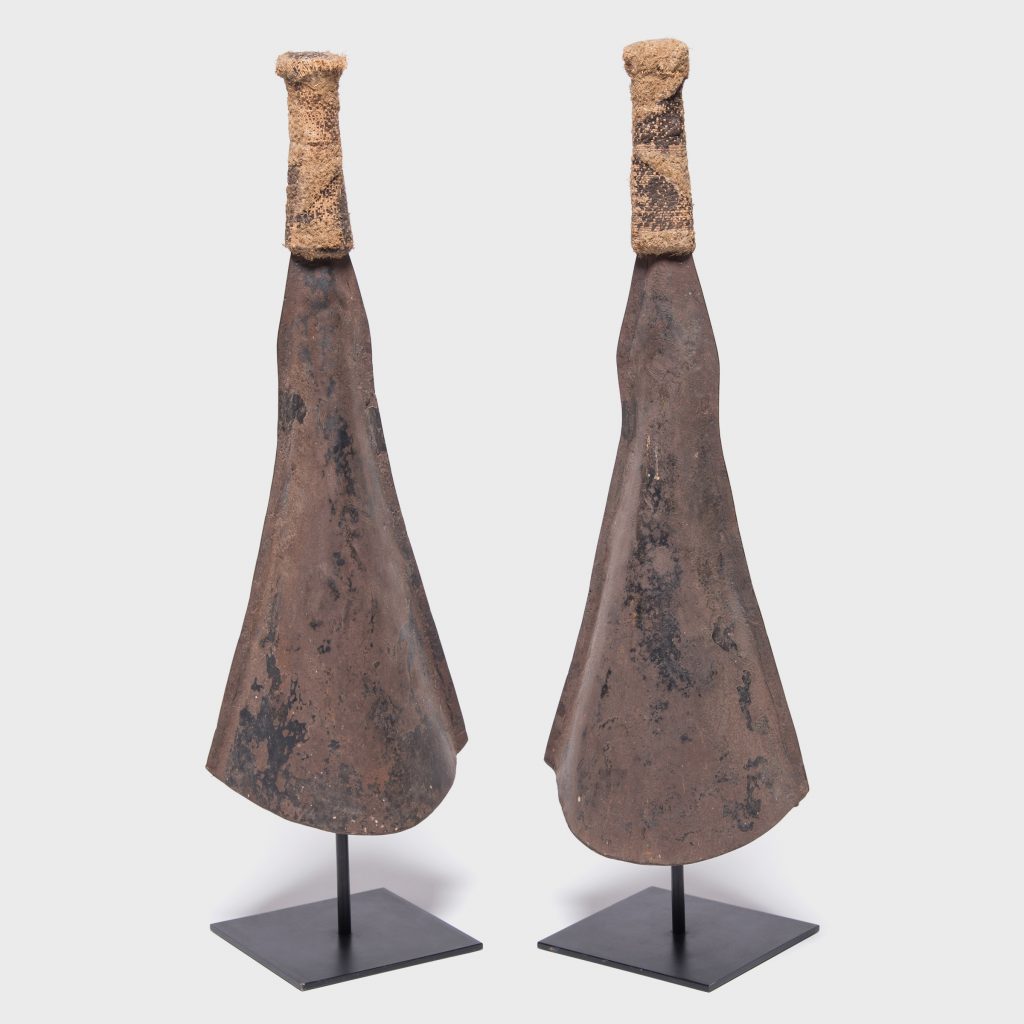