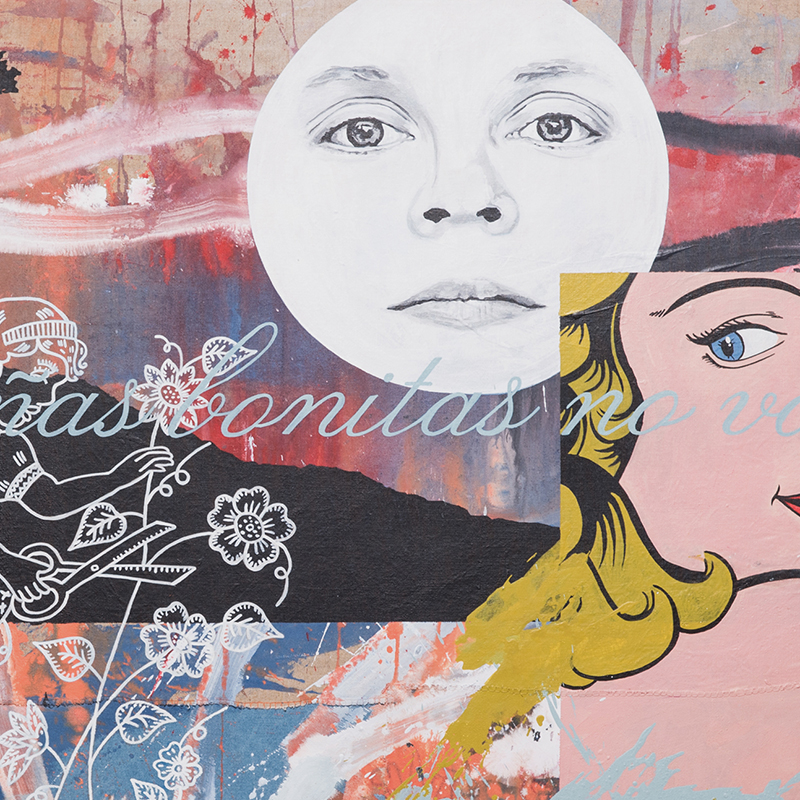 On view from September 5 through October 31, 2017, the work of Almudena Rodriguez is a clear-sighted look at our current time and place. It’s also a celebration of craft and mixed media. Having lived in Spain, Mexico and the United States, Rodriguez shares our fascination with the cross-cultural pollination of ideas and materials. In particular, she points to Mexico’s “complexity and contradictions” as “an endless source of stimuli.” In her paintings, comics, religious iconography, and mass media populate “a world in which self-perception is determined by movies and publicity.” 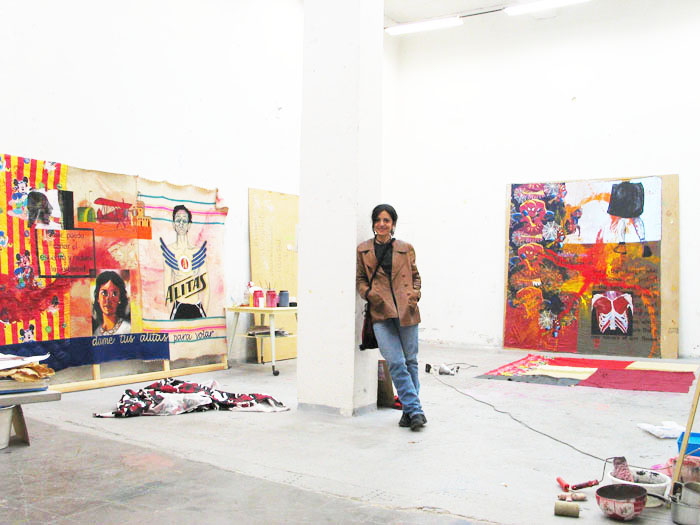 Almudena Rodriguez in her Studio

All these works are part of the series of paintings in which I analyze what is known as the “Pygmalion Effect,” applied in this case to the narrative of the artistic work. How we can influence or determine the viewer’s perception through art? Is that really possible? I’m interested in this subject because it’s based on ambiguity. My work proposes both positive and negative results in its application. 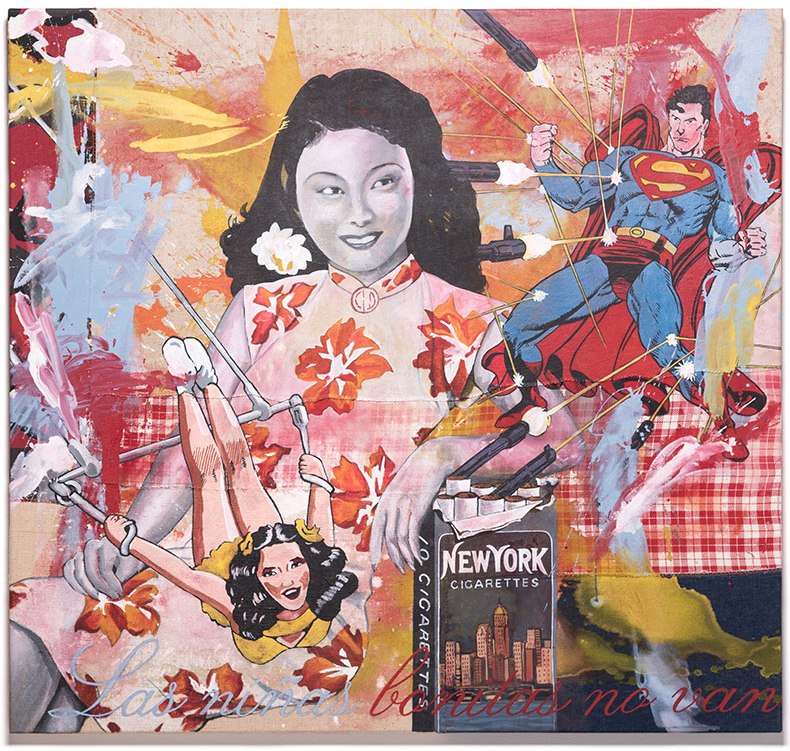 In the “Pygmalion Effect,” Rodriguez explores the popular psychological idea that greater expectations lead to better performance, questioning how an artist can influence the viewer’s perception. In mixed media on fabric, the paintings layer images and messages ranging from comic-book heroes to abstract splashes and splatters, asking the viewer to stretch their understanding of style, meaning and perception. 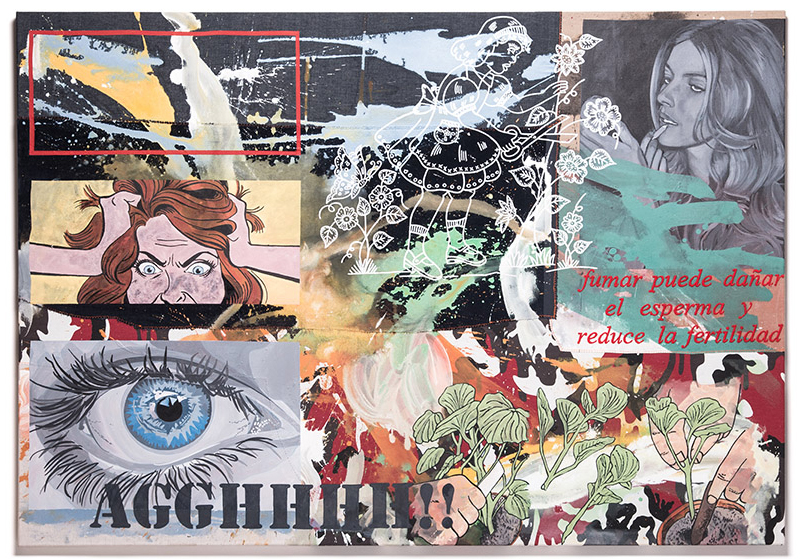 Characters from comics, as those from mythology of the past, are our idols of today—references of our time. My characters find themselves in a world in which self-perception is determined by movies and publicity, as hidden economic interests, instead of being determined by art or thinking. From an attitude of irony, sarcasm and jeer, my intention is to reflect on this absurdity. 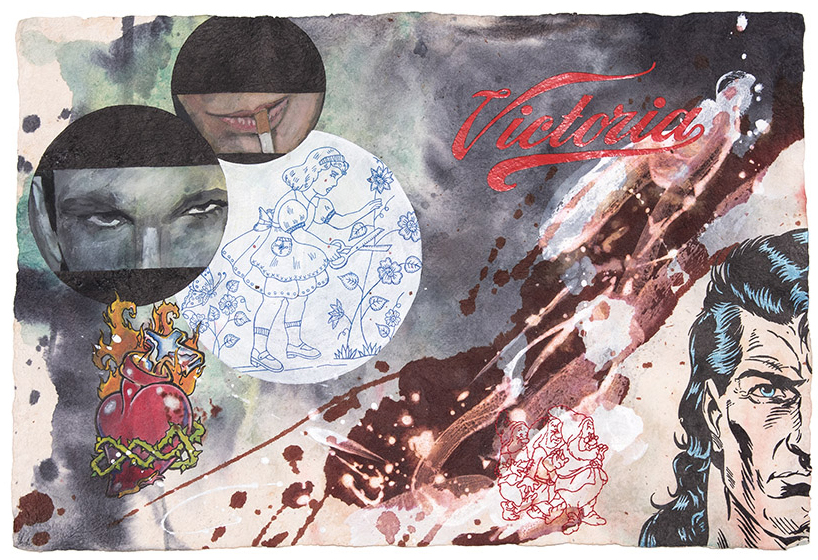 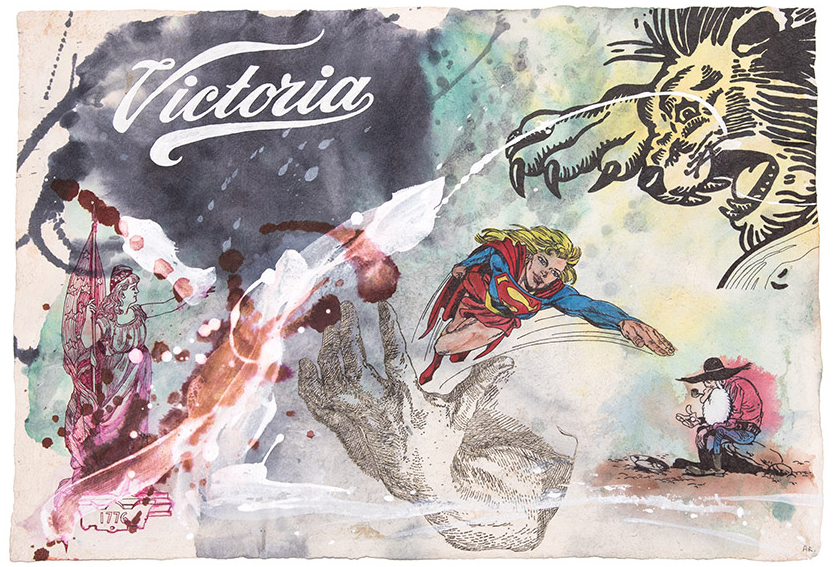 Works on paper combine acrylic, aniline, ink, watercolor, enamel and embroidered thread on amate paper. Made from tree bark, amate paper is thousands of years old, and was once used by indigenous cultures in Mesoamerica to create early handwritten books. 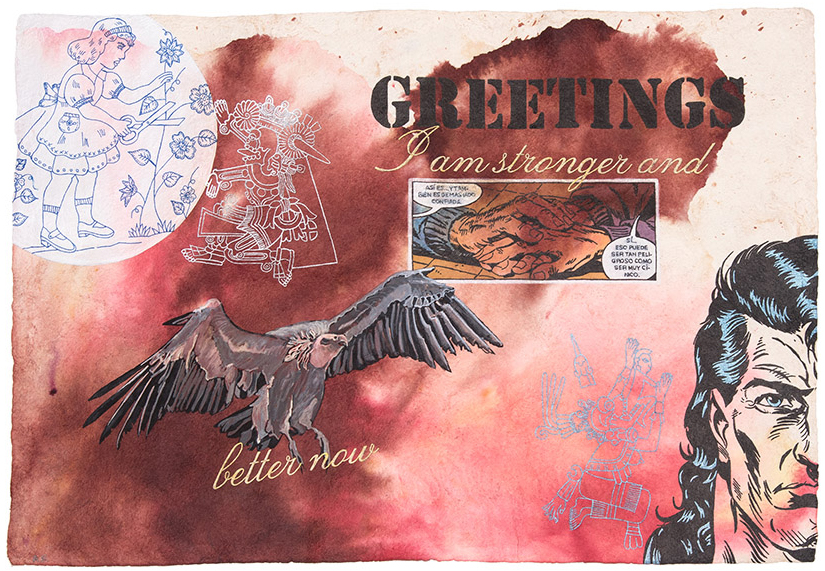 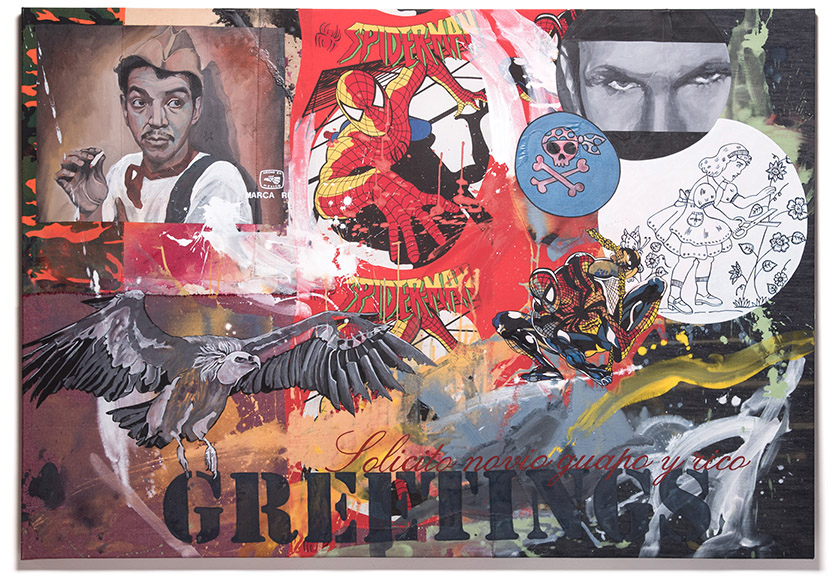 In my paintings the canvas and the white cloth disappear. Materials are sewn together—artificially forming a kind of map on which I re-arrange what I have experienced and observed: my own vision. The delicacy of the fabrics is an important part of the work. They have different tactile qualities, and that’s the initial way I conceive the piece. 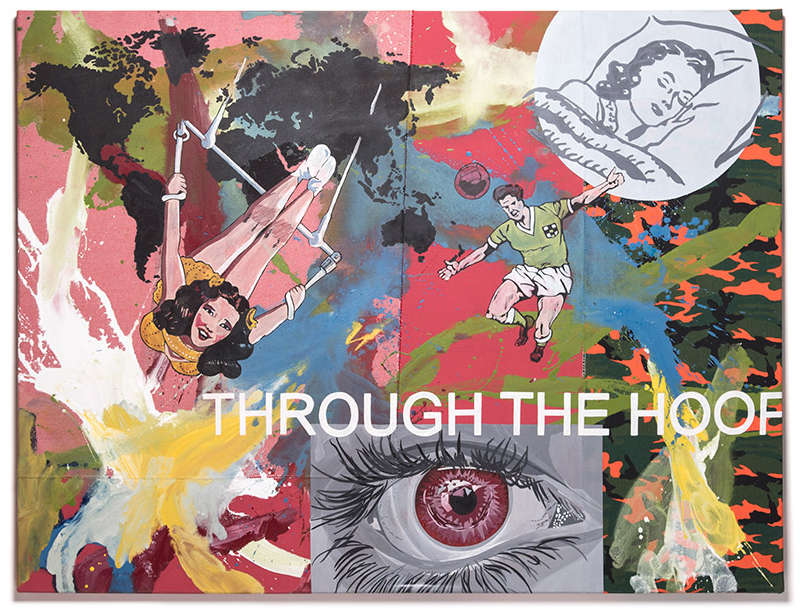 Material inspiration for much of the work dates back to 2001 to 2004, when Rodriguez lived and spent time in Mexico. 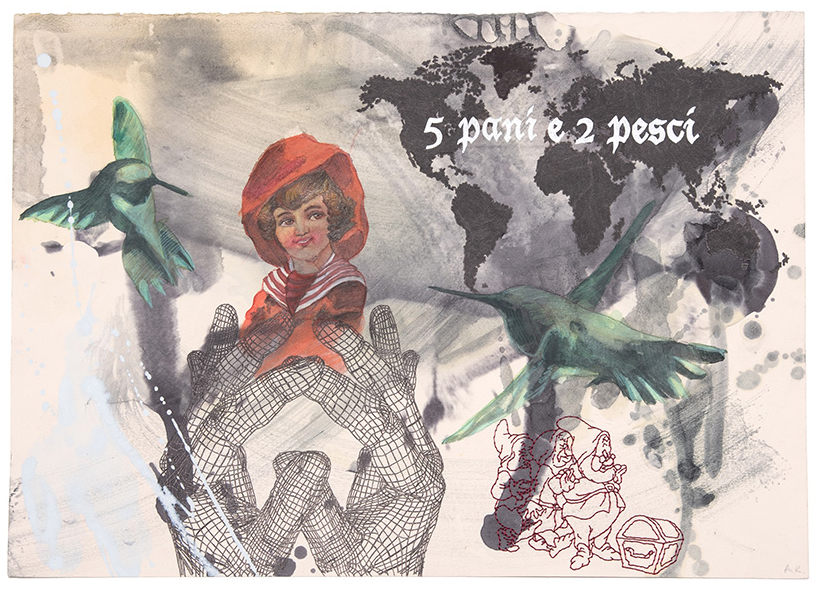 From a visual point of view, Mexico is an endless source of stimuli. It has enriched my iconography and my interest in searching for syncretism with my European references. Contact with Mexican Ex-Votos (religious offerings) originally led me to introduce texts into the works. 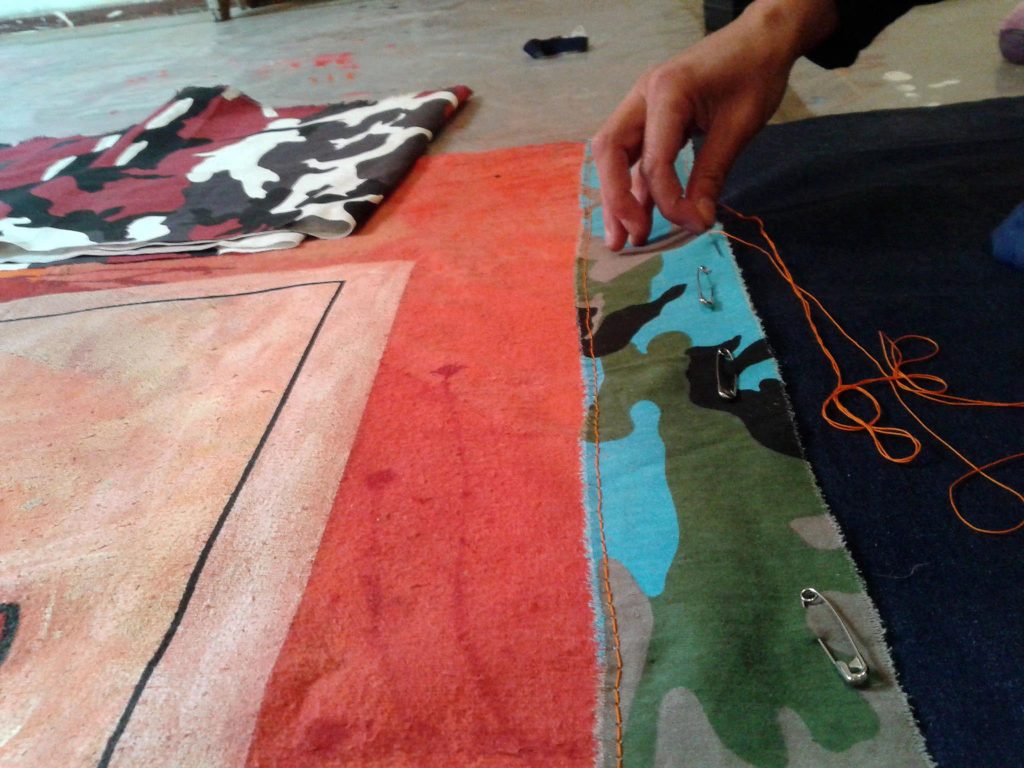 Almudena Rodriguez Working in her Studio

To see the richly layered work of Almudena Rodriguez in person, visit the PAGODA RED Gallery.