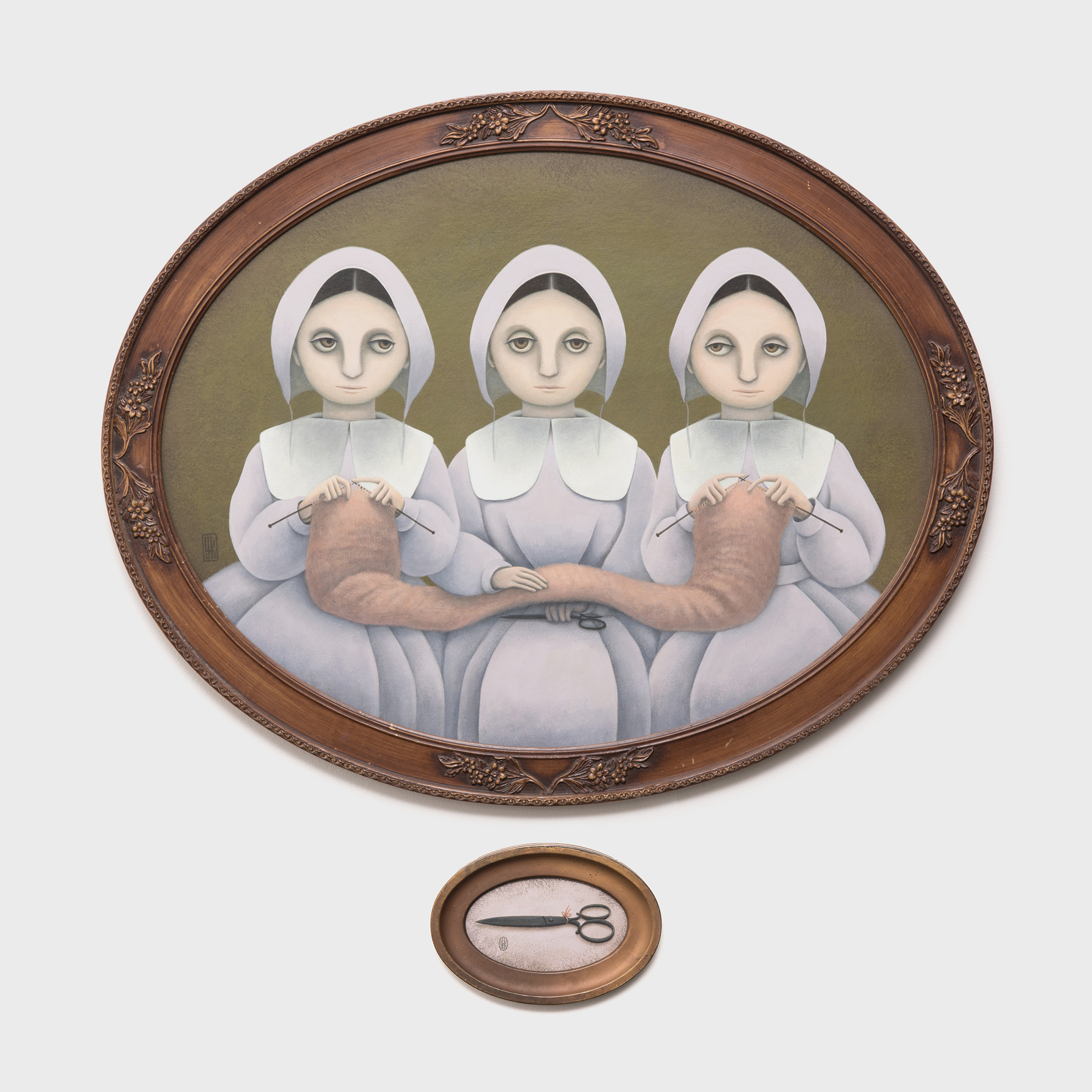 The Enchanted World of Yoko Tanaka

Whether she’s working with paints or pencils, artist Yoko Tanaka rarely strays from her chosen palette of soft, smoky tones that lend her pieces a hushed, otherworldly quality, and a rich undercurrent of emotion. The somber figures depicted in her works are frequently placed in spare, but fanciful settings, lending them a fabulist, folkloric air.

Born and raised in Japan, Yoko earned a law degree before moving to California to attend the Art Center College of Design, in Pasadena. Post graduation, her dreamlike, atmospheric paintings quickly earned gallery attention, with numerous shows in Chicago, Los Angeles and Denver. 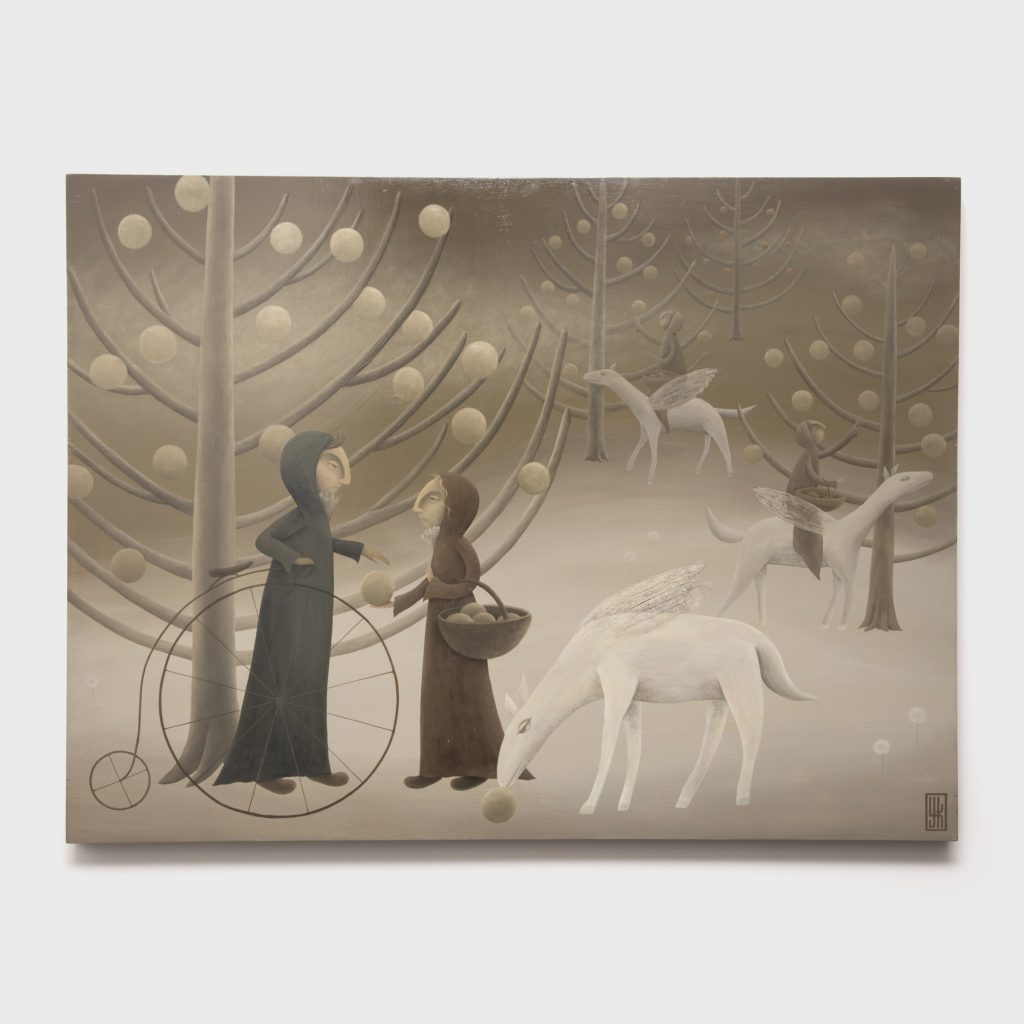 In the oil on wood painting above, robed figures collect fruit in an orchard full of winged horses. While one of the subjects has an 1870s style high-wheel bicycle and the others ride ethereal ponies, she teases toward a rich and mysterious narrative that exists beyond the painting’s borders. Perhaps it was this very storybook quality that brought literary agents calling.

“I was pursuing gallery exhibitions, painting large paintings that needed to be hung on a wall. Painting to me meant one original piece and they had to come from the depth of my feelings. This attitude changed when I was contacted by my literary agent, Steven Malk, in 2005,” explains Yoko, in the online magazine Words & Pictures. 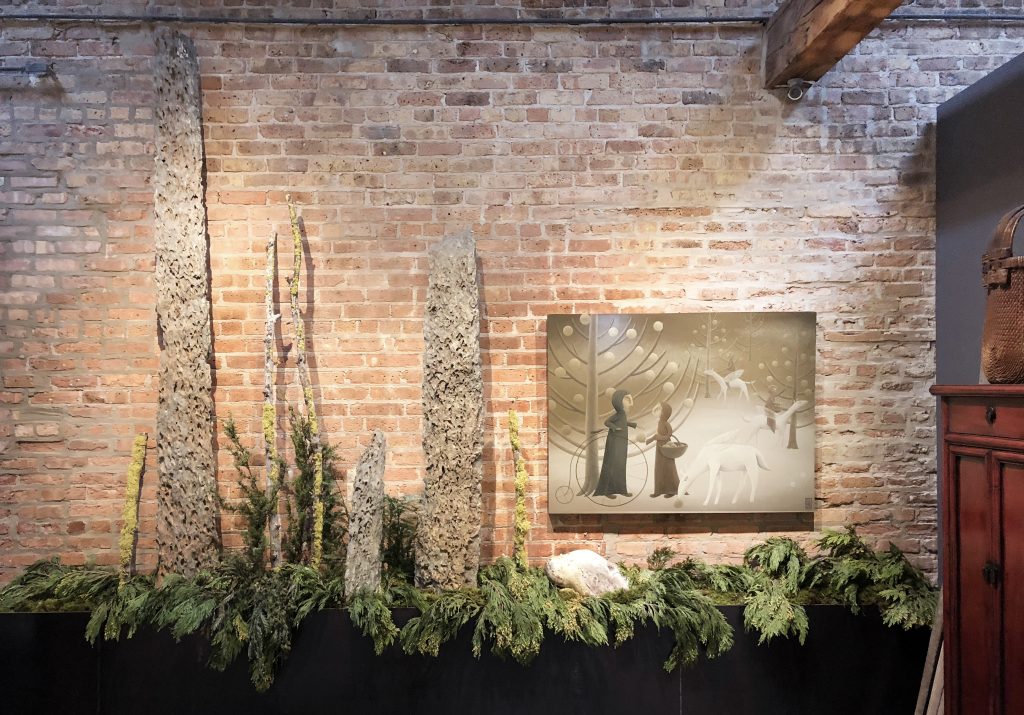 Since then, Yoko has continued to make a name for herself as fine artist, while becoming a sought-after visual storyteller in the world of children’s literature. Her first self-authored book was published in February 2020 by Candlewick Press. The wordless story is entitled Dandelion Dream. Among many others, Yoko has also illustrated books by Kate DiCamillo (see below), R.L. LaFevers, Karen Foxlee, Sara Pennypacker, Laura Godwin, and Keith McGowan. 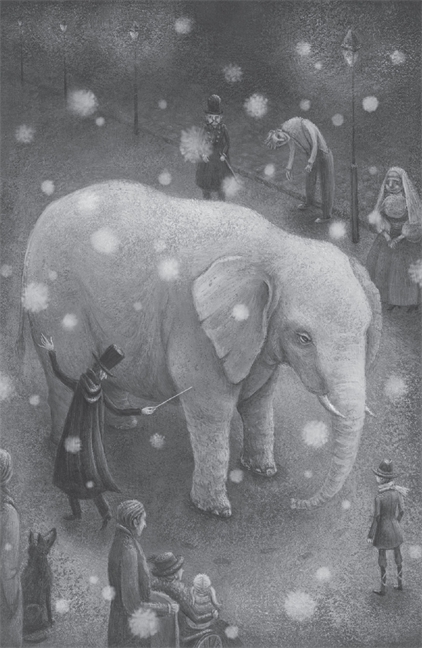 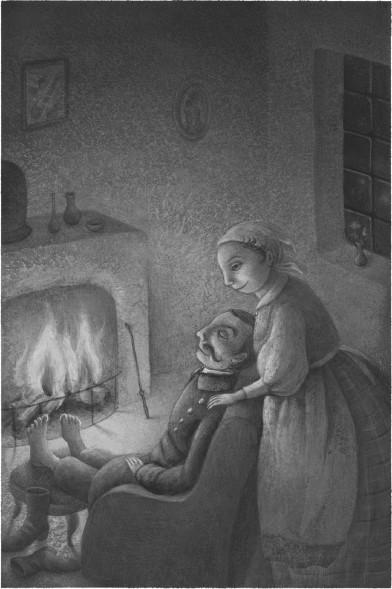 In an interview for Tiny Pencil, Yoko explains a bit about her artistic process. “When I have ideas for what I want to paint or draw, I usually see the finished images clearly in my mind in three-dimensions with full color,” she says.

“Even with sounds and smells sometimes. They are so realistic and alive. The only thing I have to do is hurry to transfer the images onto canvas or paper before I lose that emotional connection. So I usually draw a very quick sketch and then jump straight on to painting.” 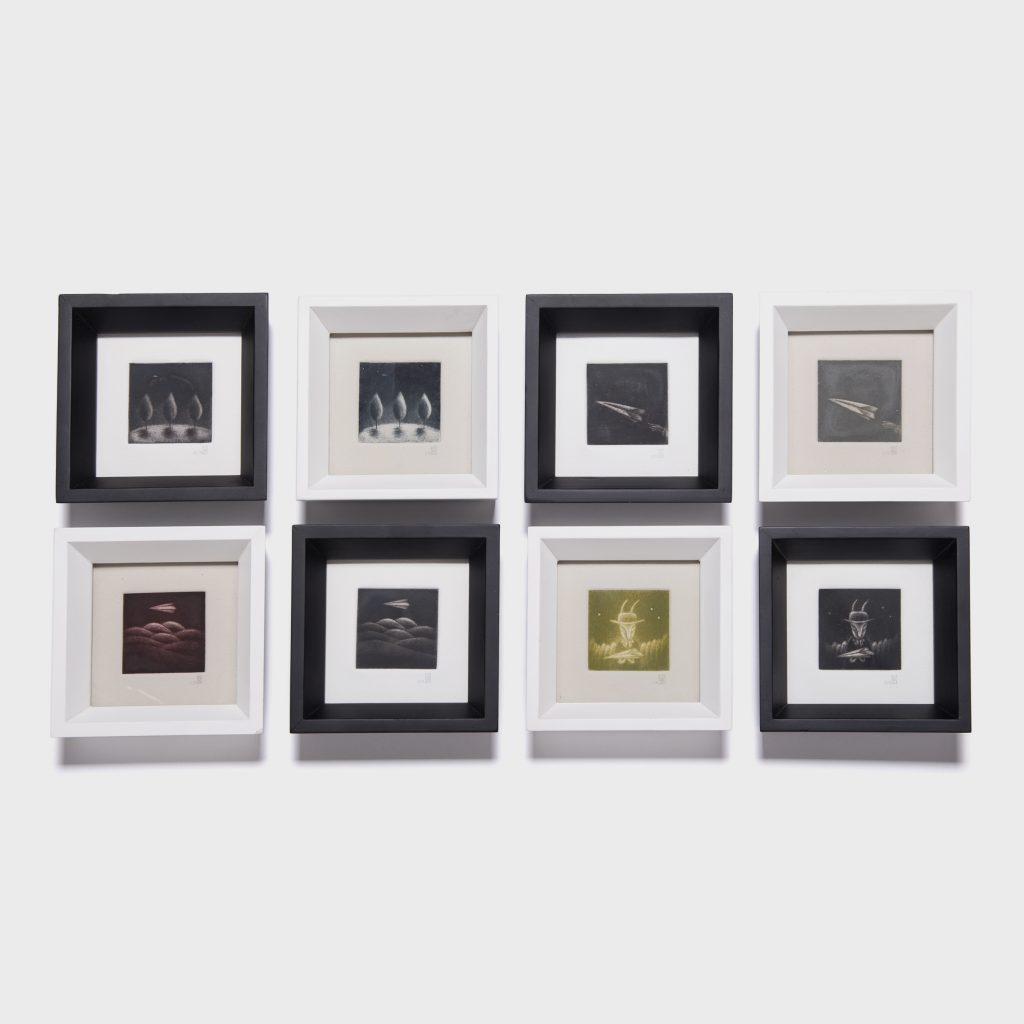 In the small prints pictured above, Yoko’s skill at infusing small gestures with a deep sense of melancholy is evident. A paper airplane takes flight, but the meticulous execution makes the act feel unexpectedly dark. 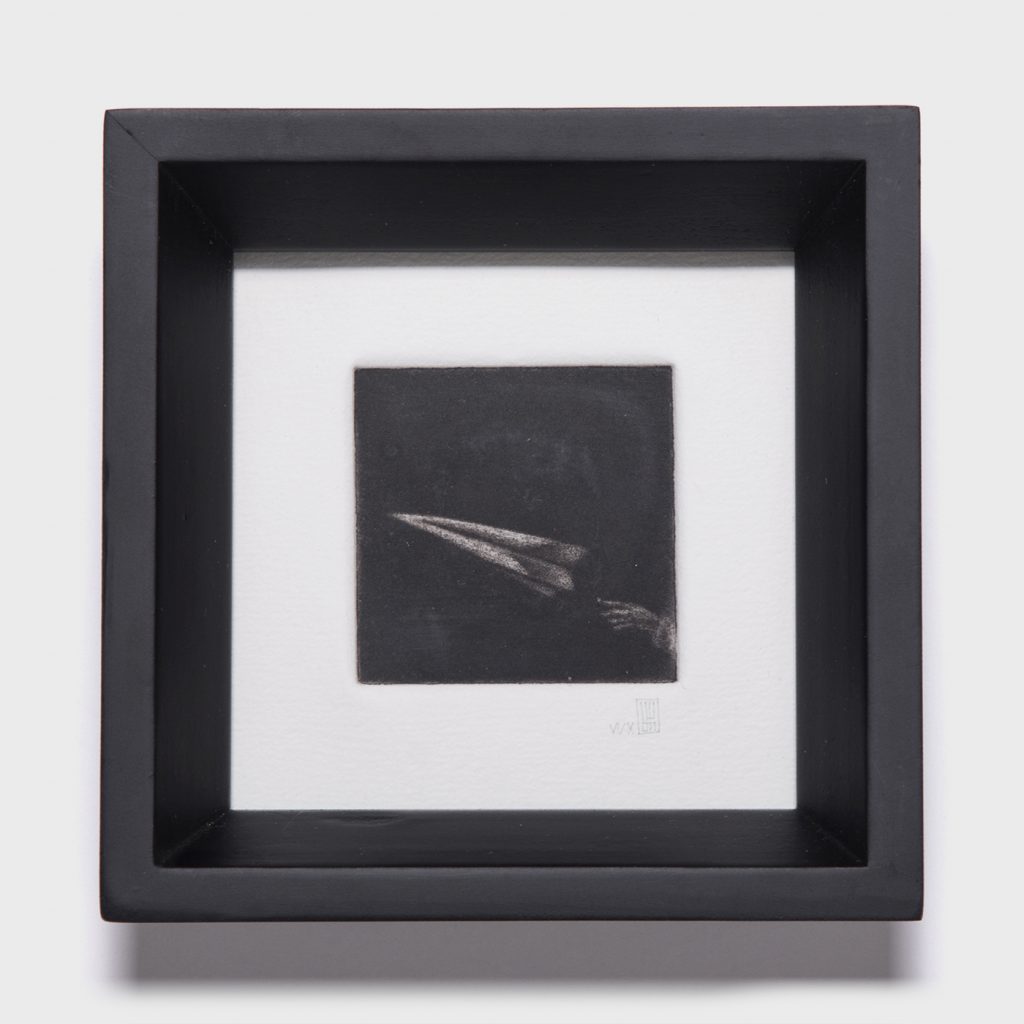 Detail from “Set of Eight Small Prints” by Yoko Tanaka

Despite her gothic flair, there is an innate humor which emanates from Yoko’s work. Take the paired paintings “Collaboration with Scissors.” 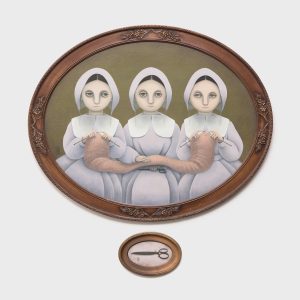 Three heavy-lidded girls sit knitting—but there is something sly in their expressions—a hint that they might be up to something more than scarf making.

The knitters shift their eyes ever so slightly to the girl in the middle, who holds a pair of scissors in her lap and will presumably make the final cut to their double-ended project. This painting is paired with a single, unadorned pair of the eponymous object. Achieving a kind of trompe l’oeil effect, the antique frames serves as visual trays, presenting the works for inspection. Taken together, the two works form an amusing narrative sequence.

Now settled in London after years of globe-trotting, Yoko has returned her focus to her fine art practice. We are proud to offer a selection of her one-of-a kind works. 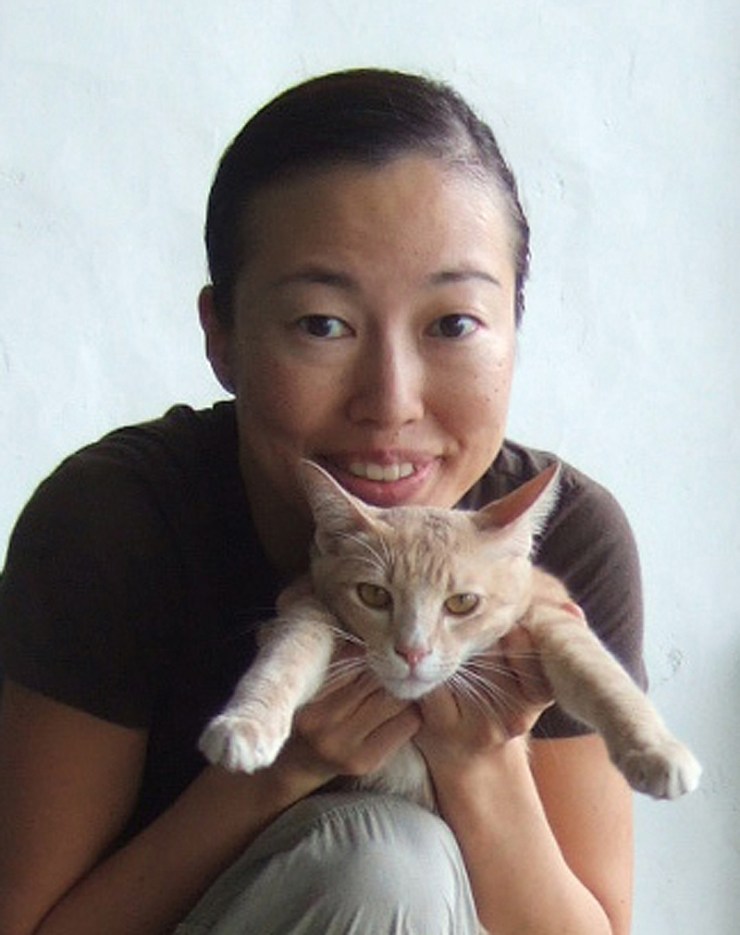